Are Samkelo and Moozlie warring? Well, that’s the question on the lips of some fans right now. Both artistes are set to release new projects, and some peeps think they are not warring but faking a fight to promote their imminent projects.

Samkelo, a notable actress, had announced days ago that she was taking a break from acting to focus on her music. Samkelo claims Moozlie poured a drink on her and ran away. She indicated that she couldn’t retaliate at the time because Moozlie was surrounded by five people.

Also, she insisted Moozlie had poured the drink on her out of jealousy. Samkelo had earlier given a performance at Altitude, which some fans thought was outstanding. She said that was the reason for Moozlie’s jealousy.

Not Samkelo dragging Moozlie for almost an hour 😩😩😩 pic.twitter.com/eirw7ImpYf

Samkelo claimed to have blocked Moozlie after the incident but unblocked her again. She encouraged Moozlie to unblock her as well so they can chat. She said she is giving Moozlie the opportunity to apologize.

Moozlie hasn’t been forthcoming on whether or not she poured a drink on Samkelo. For those who think Samkelo is on to some publicity stunt, the singer insists it couldn’t be a promo because the promo for her music has already begun on Instagram. You can check out some of the screenshots below. 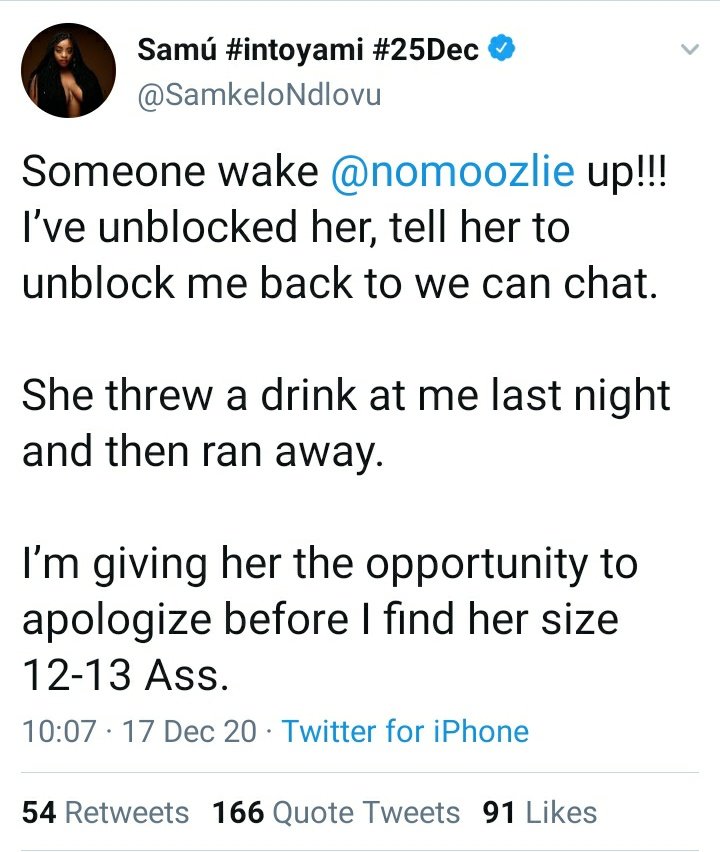 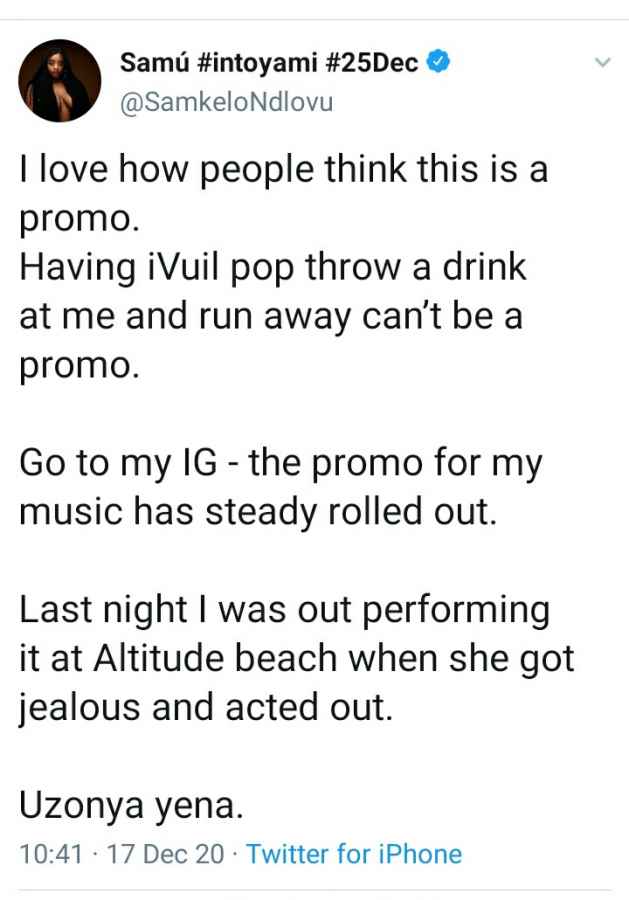 By the way, celebrity wars are nothing new. Now and again, celebs get into each other’s nerves and end up hurling stones at each other on social media.

In some instances, based on prevailing realities, the celebs get criticized for staging things to promote their works. Could that be the case with Samkelo and Moozlie in spite of Samkelo’s denials? Time will tell.

Well, what do you think about the alleged fight between Moozlie and Samkelo? You’re welcome to join the conversation by dropping your thoughts in the comment section below.

Tags
Moozlie Samkelo
John Israel A Send an email 17 December 2020
Back to top button
Close
We use cookies on our website to give you the most relevant experience by remembering your preferences and repeat visits. By clicking “Accept All”, you consent to the use of ALL the cookies. However, you may visit "Cookie Settings" to provide a controlled consent.
Cookie SettingsAccept All
Manage Privacy