The beef between Emtee and Cruz Afrika continues bloodily, with embarrassing new twists, with the recent claim by Cruz Afrika that his friend slept with Emtee’s baby mama, Nicole Chinsamy. Emtee and Chinsamy have been in a relationship many years and have two sons together, Avery and Logan.

He also revealed that the same friend, who he called Choc, slept with Ruff ATM’s girlfriend as well. He dared Emtee to challenge him and he would make more revelations. 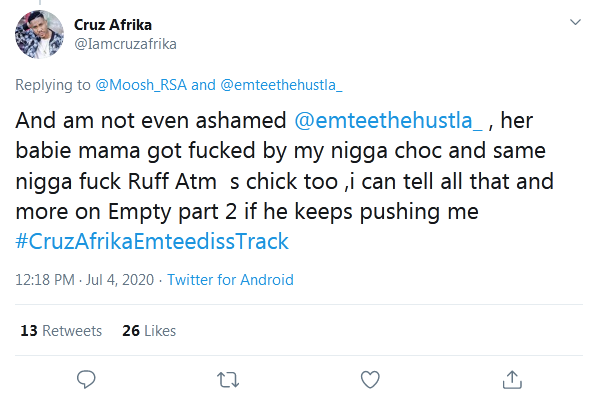 In the game of beef, anything can be claimed to hurt the other person and even pull him down. We cannot confirm what Cruz Afrika has said regarding Emtee and his baby mama, true or false.

Based on the responses to Cruz Afrika’s post, it is clear the denizens of twitter are already salivating for more “revelations” from Cruz Afrika. In fact, they are goading him to go ahead and reveal more from what he knew. Would he take thir bait? The coming days should reveal a lot, especially in Emtee should sally forth and make equally damaging revelations of his own.

Tags
Cruz Afrika Emtee
John Israel A Send an email 7 July 2020
Back to top button
Close
We use cookies on our website to give you the most relevant experience by remembering your preferences and repeat visits. By clicking “Accept All”, you consent to the use of ALL the cookies. However, you may visit "Cookie Settings" to provide a controlled consent.
Cookie SettingsAccept All
Manage Privacy