Most people have ideas or visions of where they want to go or be in life. But they end up not getting there because of fear of the unknown or because they refuse to take initiate.

To this set of people, radio host and DJ Dineo Ranaka has some pieces of advice – the result of her own experience rising from obscurity to fame.

In a recent post to her Instagram, the successful entertainer encouraged her fans to take the big leap NOW. (Emphasis hers). She admitted the unknown might be scary – and it’ll always be – but  peeps still need to act NOW on their dreams to achieve what they have in mind to. You an check out her post below. 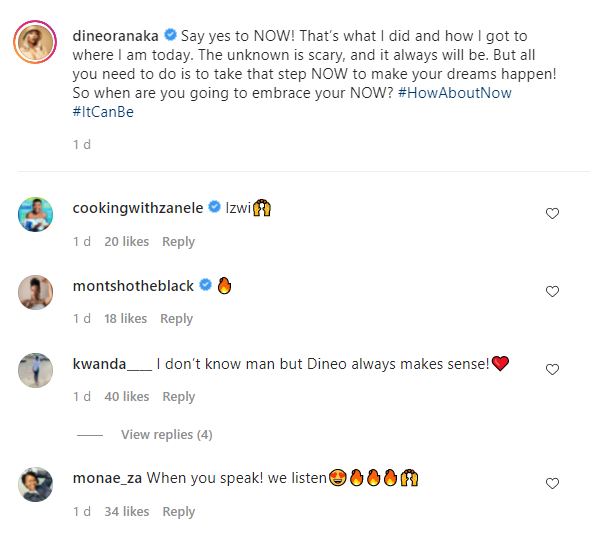 Interestingly, despite her success, Dineo Ranaka has been spared the allegations that she became successful through ecil powers.

Just recently, another equally successful Mzansi personality, Cassper Nyovest, had been accused of becoming successful through his association with the Illuminati, a claim he dismissed. Instead, he attributes his success to good and to hard work.

Well, it remains to be seen which among Ranaka’s fans would take her advice, and how well and how long they would ride with it. Stay tuned.

Tags
Dineo Ranaka
John Israel A Send an email 11 November 2021
Back to top button
Close
We use cookies on our website to give you the most relevant experience by remembering your preferences and repeat visits. By clicking “Accept All”, you consent to the use of ALL the cookies. However, you may visit "Cookie Settings" to provide a controlled consent.
Cookie SettingsAccept All
Manage Privacy