In an industry where everyone seems to be for himself, Cassper Nyovest has shown serious love to fellow muso DJ Cleo, and the latter has been loud appreciating it.

DJ Cleo is one of the veterans in South Africa’s music space and one who rarely fails to give flowers to whom due. Previously, he had thanked DJ Fresh who had aided him when he made his debut on radio.

At Easter, DJ Cleo had shouted out cassper Nyovest for rocking his number “Avulekile.” He acknowledged the gesture was rare in the industry. You can check out the Instagram post below. 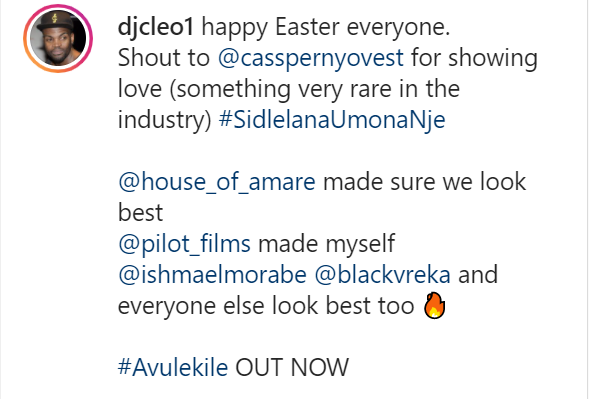 By the way, Cassper Nyovest is known to show love to other artistes, especially those with whom he is in good terms. When Nasty C released his “Zulu Man With Some Power” album a year ago, the songster had urged his fans to go stream the project.

In the same year, Cassper Nyovest had hinted he’d be releasing an amapiano project in 2021. He confirmed days ago that the album is in the works, with singles that can easily beat what other artistes have out there.

Well, until the project drops, Dj cleo is happy to know the family Tree boss has got his back musically.

Tags
Cassper Nyovest DJ Cleo
John Israel A6 April 2021
Back to top button
Close
We use cookies on our website to give you the most relevant experience by remembering your preferences and repeat visits. By clicking “Accept All”, you consent to the use of ALL the cookies. However, you may visit "Cookie Settings" to provide a controlled consent.
Cookie SettingsAccept All
Manage Privacy