This milestone is particularly significant for the songster in that it is his first 1 million views on the video-sharing platform. Equally significant is that the music video took just about a month to reach that number.

Expectedly, he is excited about the numbers and has taken to social media to share his excitement, thanking his fans all the way. In his post, he made it clear that the support of his fans made the 1 million views milestone appear so effortless.

He thanked Bucy Radebe, his collaborator on the song, announcing that he is in pursuits of greater wins this year, while urging his fans to stay tuned for them.

DJ Cleo is one of South Africa’s music veterans. A maestro at the deck and turntables, he has retouched works of several Mzansi musos. Of course, besides that, he has numbers wholly his own.

Well, what do you think of DJ Cleo reaching his first 1 million views on YouTube with  “Gcina Impilo Yam” music video? You may want to join the conversation by dropping your thoughts in the comment section below. Way to go! 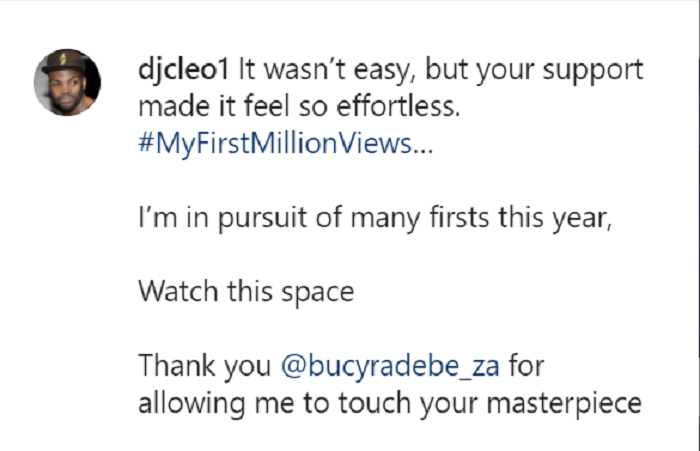 Tags
Bucy Radebe DJ Cleo
John Israel A Send an email 9 March 2021
Back to top button
Close
We use cookies on our website to give you the most relevant experience by remembering your preferences and repeat visits. By clicking “Accept All”, you consent to the use of ALL the cookies. However, you may visit "Cookie Settings" to provide a controlled consent.
Cookie SettingsAccept All
Manage Privacy