Tomorrow is Friday and it holds special significance for South Africa’s music orbit because the private funeral of DJ Dimplez (Boitumelo Mooi) will be held then.

The celebrated musician had died of a brain hemorrhage in his home last Sunday, according to a statement released by his family. He’s the second notable South African musician to have died in two months. The other is Riky Rick.

In a statement released by Pop Bottles, a company he set up before his death, the details of the private funeral of DJ Dimplez were spelled out.

First off, the family thanked the public for the support following the hip-hop DJ’s death. The statement further noted that the songster will be buried tomorrow Friday in a private ceremony open to family and a few close friends only.

While the burial ceremony isn’t open to the public, it will still be streamed for members of the public to follow. The streaming details will be shared just before then.

After the burial, a memorial that is open to the public will be held in the DJ’s honor. The details about that will be announced later. Those who want to attend will have to stick to COVID_19 protocols. 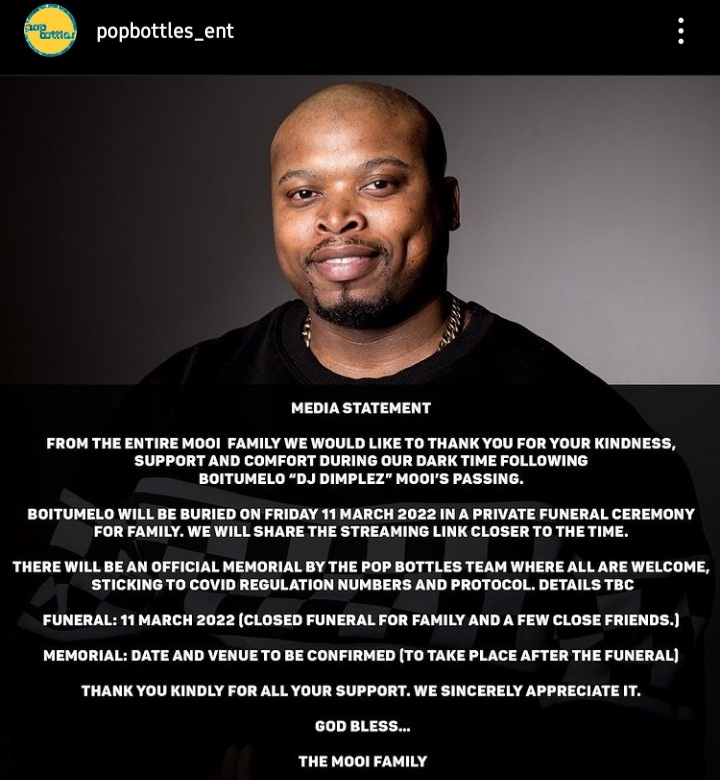 DJ Dimplez will be sorely missed for his contributions to South Africa’s music universe.

Tags
DJ Dimplez
John Israel A Send an email 10 March 2022
Back to top button
Close
We use cookies on our website to give you the most relevant experience by remembering your preferences and repeat visits. By clicking “Accept All”, you consent to the use of ALL the cookies. However, you may visit "Cookie Settings" to provide a controlled consent.
Cookie SettingsAccept All
Manage Privacy