Just recently, a South African lady accused DJ Fresh and his friend and fellow DJ Euphonik of drugging and raping her. She said she had to take anxiety meds to have the courage to post her rape allegations.

Her allegation provoked great furor online, with social media users commenting on what she said and the innocence or otherwise of the accused. If you missed the backstory, you may want to check it out here.

In a statement, DJ Fresh, a veteran radio DJ, had dismissed the allegations as spurious. He denied ever knowing the woman in question, describing as weird that he would have to explain himself about the stranger. He thinks that’s the price one has to pay for being in the public eye.

On his part, DJ Euphonik tweeted to the South African police, stating he and DJ Fresh are waiting for a case number and eagerly anticipating details. He was criticized for tweeting to n account the police said is barely monitored. See his tweet below. 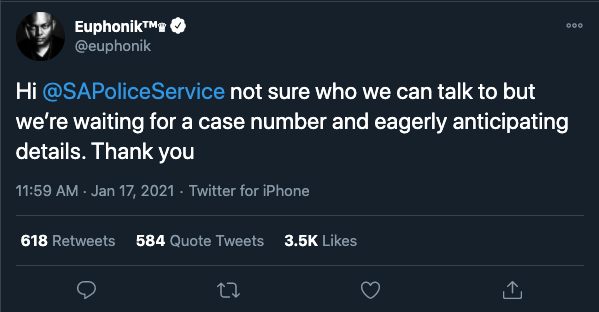 What do you think of DJ Fresh’s and DJ Euphonik’s responses to the rape allegations leveled aginst them? You might want to join the conversation by dropping your thoughts in the comment section below