DJ’s Fresh and Euphonik have stopped down from their roles at 947 while investigations into their sexual assault accusations are being carried out.

In case you dont know what’s happening, Thato Sikwane aka DJ Fresh and Themba Nkosi aka Euphonik have been accused of sexual assault. The assault allegations were made by a Twitter user @Nampree who accused the DJs of drugging and raping her in 2011.

The woman has since locked her account, making her tweets visible to her followers alone. In a recent statement released by the Disc Jockeys, they have announced that they will be stepping down from their roles at 947 until investigations into the accusations are complete.

Primedia and its acting CEO, Geraint Crwys-Williams have in a recent statement said that the decision will allow the DJs focus on addressing the accusation leveled against them. Euphonik joined the station back in 2016, while Fresh joined in 2019, and has since been the host of the Drivetime show. 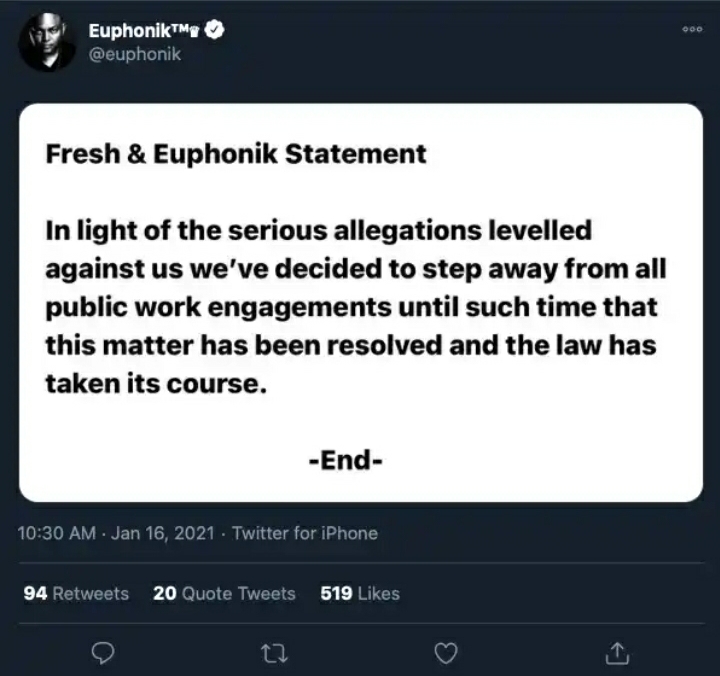 Tags
DJ Fresh Euphonik
John Jabulani Send an email 16 January 2021
Back to top button
Close
We use cookies on our website to give you the most relevant experience by remembering your preferences and repeat visits. By clicking “Accept All”, you consent to the use of ALL the cookies. However, you may visit "Cookie Settings" to provide a controlled consent.
Cookie SettingsAccept All
Manage Privacy