2021 is over as you probably already know. It was a splendid and memorable year for South African singer and disc jockey DJ Hlo, as she was named winner of the Ukhozi FM Song of the Year award.

Her win had provoked mixed reactions online. While some congratulated her on the win which was especially significant because she’s the first woman to win the award, others mocked her choice and insisted that she doesn’t deserve the scudetto.

This set of people also insisted that they have never heard the DJ’s name until she was announced the winner of the Song of the year.

Well, to those who have reacted negatively to her Ukhozi FM win, DJ Hlo has just a few words. And they’re not what you think. In a post to Instagram in which she a hashtag of the song that won the Ukhozi FM scudetto, “Isibani,” she had noted that mindset is what separates the best from the rest. 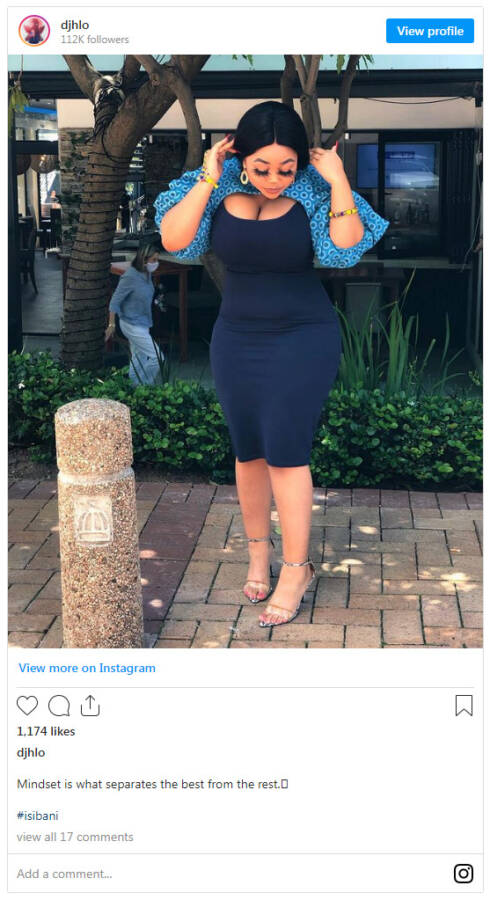 She’s got what she wanted all along and she wouldn’t want to dwell much on what a section of social media thinks about the win. Well, her core fans were in the comments of the same post to congratulate her some more.

Tags
DJ Hlo
John Israel A Send an email 4 January 2022
Back to top button
Close
We use cookies on our website to give you the most relevant experience by remembering your preferences and repeat visits. By clicking “Accept All”, you consent to the use of ALL the cookies. However, you may visit "Cookie Settings" to provide a controlled consent.
Cookie SettingsAccept All
Manage Privacy