It’s that time of the year again when musicians get to know how well their songs are doing and how deeply they are appreciated via what is known as the Ukhozi FM Top 10.
this initiative brings together some of the resonant songs released in the year and places them on the same pedestal for one to emerge as the overall top song of the year.

Since the initiative started, expectedly, it has been plagued with controversies, with some tweeps claiming that deserving artists were robbed of their honor, and some countering that winners got what they deserved.

Would this year’s initiative be any different? The coming days will tell, of course. For now, peeps are just fevered with expectations because Ukhozi FM’s top 10 is back.

On Friday, November 25, the radio station called on members of the public to nominate their favorite songs for the competition, the entries started pouring in.

In a post on its official Instagram page, the radio station announced the top 10 for the award. Ngena Noah is in position “A” with the song “Betusile.” Big Zulu and his associates come just behind with their joint song “Voicemail.” The complete list follows. 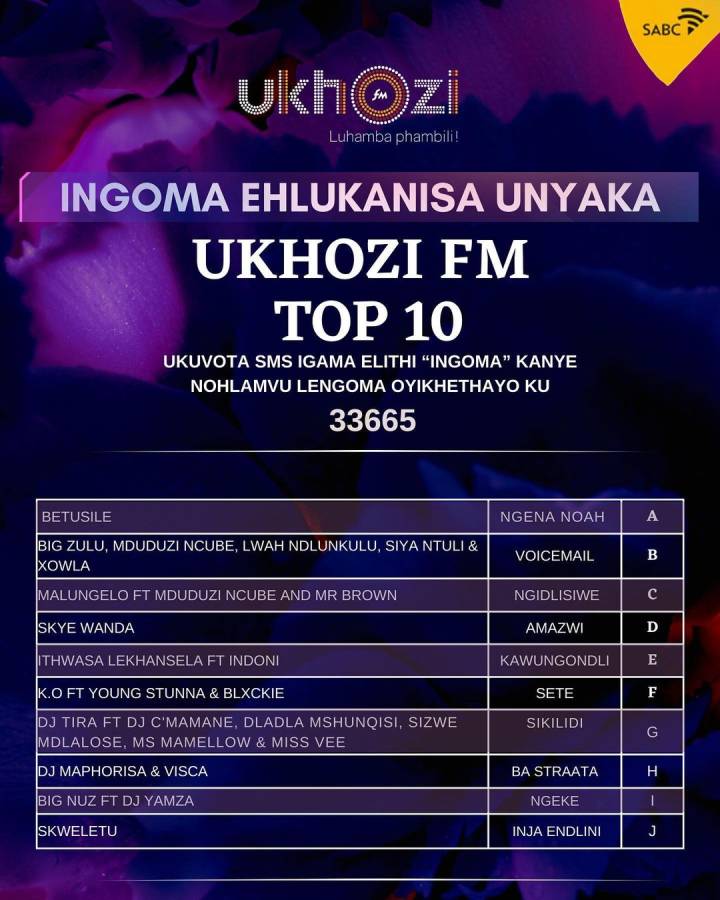 It remains to be seen who will emerge as the best of the pack.

Tags
Top 10 Ukhozi FM
John Israel A3 December 2022
Back to top button
7
Close
We use cookies on our website to give you the most relevant experience by remembering your preferences and repeat visits. By clicking “Accept All”, you consent to the use of ALL the cookies. However, you may visit "Cookie Settings" to provide a controlled consent.
Cookie SettingsAccept All
Manage Privacy