Kabza De Small recently turned 30 and his industry associates turned out in numbers to celebrate him. The songster himself has not said anything on Instagram about his birthday. But his fans and industry peers have been celebrating him.

In a post on his verified Instagram page, his associate and collaborator DJ Maphorisa had shared a picture of him looking dapper. In the caption, Phori called him a brother and wished him blessings.

In a post on Instagram, another musician, Masterpiece YVK shared a picture of him and Kabza De Small. He wished the amapiano producer a happy birthday and also noted that Kabza had done so much for him. He ended up lavishing him with God’s blessings.

Lady Du wished him a happy birthday as well, while also describing him as the most down-to-earth person she knows. 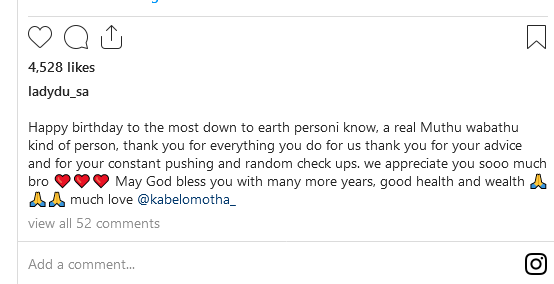 Kabza De Small has come a long way as a musician. He started playing amapiano music before it became popular, and he stuck to the genre long enough to be eventually recognized as one of its major voices.

According to some accounts, at some point in his career, he was playing for six beers. But that’s in the past now. Some solidarity, Kabelo!

Tags
Kabza de Small
John Israel A29 November 2022
Back to top button
6
Close
We use cookies on our website to give you the most relevant experience by remembering your preferences and repeat visits. By clicking “Accept All”, you consent to the use of ALL the cookies. However, you may visit "Cookie Settings" to provide a controlled consent.
Cookie SettingsAccept All
Manage Privacy