Amapiano ace DJ Maphorisa has given what he thinks is lacking on the music scene in South Africa while also indicating his hope the issue is addressed.

According to the songster, in South Africa, people are missing artist management, and that has been the downfall of many an artist.

To clarify what he meant, he noted that he was not referring to booking agent or booking management. He also pointed out what he considers the failure of record labels in A&R. He’s especially unimpressed that most times, the peeps record labels hire are not body and soul into the industry and don’t go out grooving. You can check out his post below. 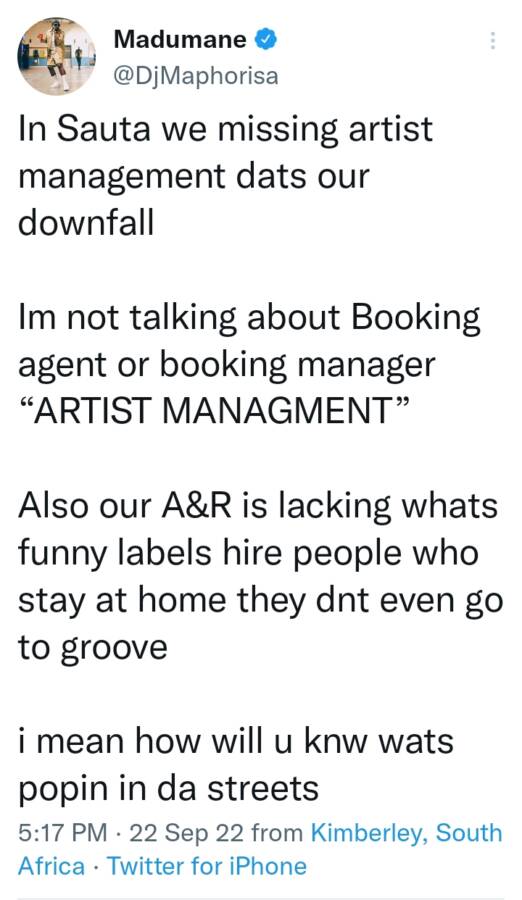 As one of the leading voices in South African music and one to whom many look up, he has a point, perhaps. The songster himself has come a long way. From an unknown artist, he’s worked his way into national resonance with his “Gqom Waves” series. Thereafter, thanks to the feedback he got about amapiano from Wizkid, he’d delved into the genre and has not looked back. Today it is impossible to talk about amapiano music without somehow mentioning his name.

It remains to be seen if the industry would listen to him.

Tags
Dj Maphorisa
John Israel A Send an email 24 September 2022
Back to top button
Close
We use cookies on our website to give you the most relevant experience by remembering your preferences and repeat visits. By clicking “Accept All”, you consent to the use of ALL the cookies. However, you may visit "Cookie Settings" to provide a controlled consent.
Cookie SettingsAccept All
Manage Privacy