DJ Maphorisa has leaned on the help of social media to respond to a fan who praised him amid his exploitation accusations.

Many artists have come for the DJ, before now, with claims of not getting any credit for hits they produced under his label, Blaqboy Music. Some have even alleged that the superstar DJ has not even been paying them for their work.

The DJ and producer has shared that some of his peers in the industry legit thought he was coo-coo when he started pushing the Amapiano sound. The star took to social media to react to a fan amid his exploitation accusations. 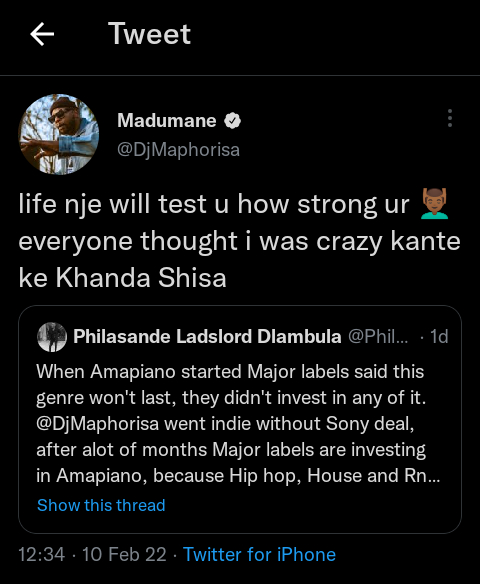 A bunch of folks went on his timeline to share their mixed reactions to his post. Some had some really nice things to say to him, while others slammed him for allegedly exploiting young artists.

Shadwoolie wrote: “We are not interested in that. Why aren’t you taking care of your artists??”

“Those not happy should go open their own labels and leave Phori alone. Abo Busta are doing it on their own mos,” tweeted another.

“We can hear the music and see the work, but why ama artists aint’t taken care of?” Ceedoscedrick: “You deserve your flowers,” Sambulo_Ettos wrote. “I salute you, Phori,”

Tags
Dj Maphorisa
Ikedichim Chibundu Send an email 12 February 2022
Back to top button
Close
We use cookies on our website to give you the most relevant experience by remembering your preferences and repeat visits. By clicking “Accept All”, you consent to the use of ALL the cookies. However, you may visit "Cookie Settings" to provide a controlled consent.
Cookie SettingsAccept All
Manage Privacy