Amapiano star DJ Maphorisa said he helped his colleague and friend Kabza De Small become the force he is today.

The success of Amapiano all over Mzansi, Africa, and the world is credited to the King of Amapiano, Kabza De Small. The talented DJ pushed the genre to be what it is today and has inspired many.

However, Kabza’s story cannot be told without mentioning DJ Maphorisa, who was a significant presence in his rise. You may have come across Perry’s tweet where he listed some of the things he is and has achieved through the years.

A fan reacted to the tweet stating that Porry made Kabza who he is today. Maphorisa replied to the fan stating that the word “made” sounds “wrong n hush.” In his opinion, he helped and mentored Kabza to run a record label and have good management. No doubt, the two of them have taken the world by storm ever since. 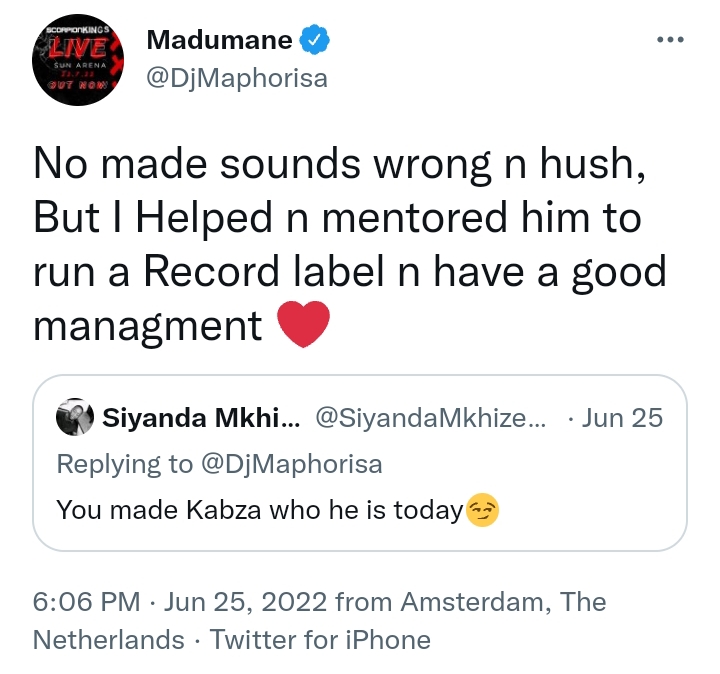 Tags
Dj Maphorisa Kabza de Small
John Jabulani Send an email 29 June 2022
Back to top button
Close
We use cookies on our website to give you the most relevant experience by remembering your preferences and repeat visits. By clicking “Accept All”, you consent to the use of ALL the cookies. However, you may visit "Cookie Settings" to provide a controlled consent.
Cookie SettingsAccept All
Manage Privacy