The eternal hustler and South African disc jockey DJ Sbu recently released a song titled “Nakupenda” in collaboration with Alikiba. The song was part of his most recent album which explored the African experience in its many hues and sounds.

He had followed up that body of work with a Guinness World Record-worthy longest radio show in the world. 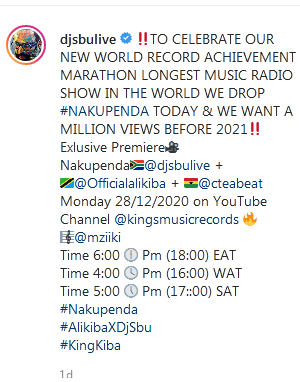 DJ Sbu should be pleased for “Nakupenda” music video to reach at least one million people before 2021. He made this much known in his Instagram post. Reaching one million views before 2021 would be a dream come true for the songster who is famous as much for his music as for his serial entrepreneurship.

“Nakupenda” video brings alive the experience of love and longing. It’s a splendid music video that should capture the attention of any lover of art out there. You can watch the video below and join the conversation by dropping your thoughts in the comment section.

Tags
DJ Sbu
John Israel A Send an email 29 December 2020
Back to top button
Close
We use cookies on our website to give you the most relevant experience by remembering your preferences and repeat visits. By clicking “Accept All”, you consent to the use of ALL the cookies. However, you may visit "Cookie Settings" to provide a controlled consent.
Cookie SettingsAccept All
Manage Privacy