Will there ever be a time when Cassper Nyovest and DJ Speedsta would put down their Twitter swords and be cool? We just wonder. Honestly, that doesn’t seem to be happening anytime soon.

The two SA Hip Hop stars have become known for throwing shade at each other. In case you didn’t know, it all began when Speedsta called Costa Titch’s “Made In Africa” album the best Hip Hop album of 2020. Although he clarified that it wasn’t a shade at Cass, the shade ship still sailed.

They have since been at odds on social media. With all of SA going gaga for Cass’s new sneakers, Speedsta isn’t in the least bit impressed. The DJ tweeted saying that while he respects the “Amademoni” star for the hustle, he wont be caught wearing the shoes. Well, Mufasa has either not seen it or he’s just ignoring him. 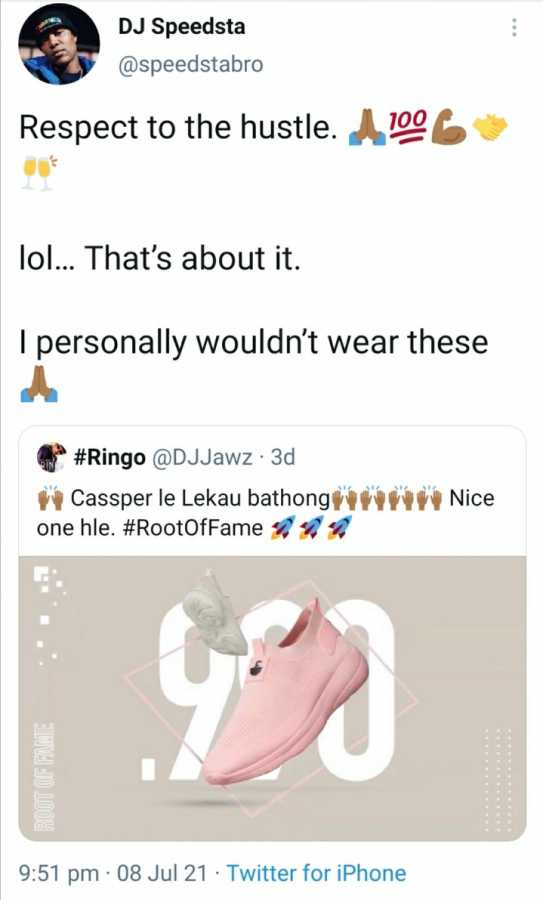 Tags
Cassper Nyovest Dj Speedsta
John Jabulani Send an email 12 July 2021
Back to top button
Close
We use cookies on our website to give you the most relevant experience by remembering your preferences and repeat visits. By clicking “Accept All”, you consent to the use of ALL the cookies. However, you may visit "Cookie Settings" to provide a controlled consent.
Cookie SettingsAccept All
Manage Privacy