Cassper Nyovest has reacted to criticisms surrounding his performance of the song “Monate Mpolaye” at the funeral of his late friend and associate DJ Sumbody.

The song belonged to the late DJ and featured Cassper Nyovest. The two had earlier performed the song in 2019, a year before the coronavirus pandemic forced the world to lock down briefly.

In a recent tweet, the Daily Sun had shared a clip of Cassper Nyovest performing the “Monate Mpolaye” song at DJ Sumbody’s funeral. The performance didn’t it down well with some tweeps, one of whom criticized Cassper for it.

A Twitter user with eh name Nkululeko Manyisa criticized Cassper for the performance, noting that the songster always makes things about him. The statement irritated Cass, who decided to set the record straight, clarifying that the family of the late DJ asked that the song be performed at the funeral and memorial as a tribute to the late musician. And he agreed to that out of respect for the family.

But then, of course, people will always talk. You can check out the post below. 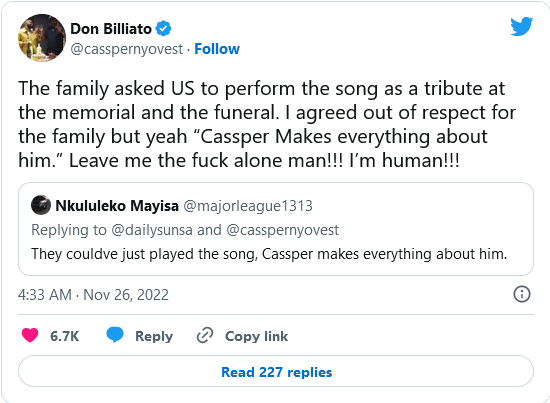 DJ Sumbody was gunned down two weeks ago while heading from one gig to another, throwing South Africa into mourning.

Tags
Cassper Nyovest DJ Sumbody
John Israel A29 November 2022
Back to top button
7
Close
We use cookies on our website to give you the most relevant experience by remembering your preferences and repeat visits. By clicking “Accept All”, you consent to the use of ALL the cookies. However, you may visit "Cookie Settings" to provide a controlled consent.
Cookie SettingsAccept All
Manage Privacy