DJ Tira and his wife Gugu Khathi were among the celebs who turned up for Nelli Tembe’s funeral. The couple shared a picture of them heading to the funeral.

In the caption, they wished strength to the families of the deceased as well as the deceased’s fiancée AKA.

The power couple looked good sartorially. Some social media denizens were unimpressed by how they turned out. The result was a string of criticisms for DJ Tira and wife. You can check out DJ Tira’s picture that annoyed some social media peeps, below. 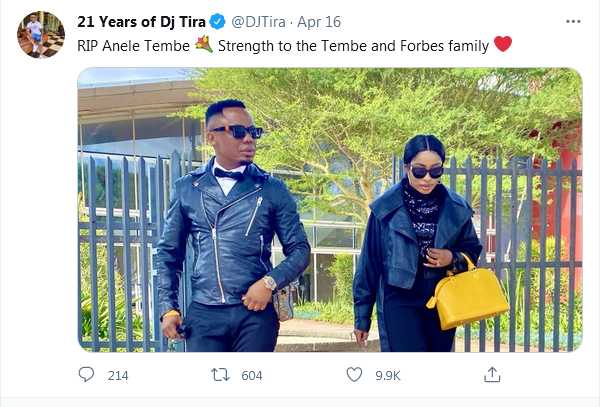 Anele “Nelli” Tembe died earlier this month, after reportedly falling from the 10th floor of the Pepperclub Hotel in Cape Town. At the time, some had claimed she jumped to her death. But her father denied this at the funeral.

Speaking at the funeral, Moses Tembe denied her daughter was suicidal and had jumped from the 10th floor of the hotel. He ended up advising young people to stay away from alcohol and drugs, leading many to insinuate she was hooked on those up to the time of her death.

Nelli Tembe’s death shocked many in that she had paty with AKA and friends the night before and no one had envisaged what followed.