DJ Zinhle is a South African disc jockey and singer and apparently one of those deeply affected by the coronavirus pandemic currently kicking the world.

Music and entertainment are part of the industries hard-hit by the pandemic.

Apparently a company had reached out to DJ Zinhle asking for a free performance. The “Uzobuya” singer was offended and ranted her anger on Twitter

She stated that for the past three months she hasn’t had an income, yet the “reputable” organization had the nerve to ask for a free performance. Dem craze? She was highly offended. 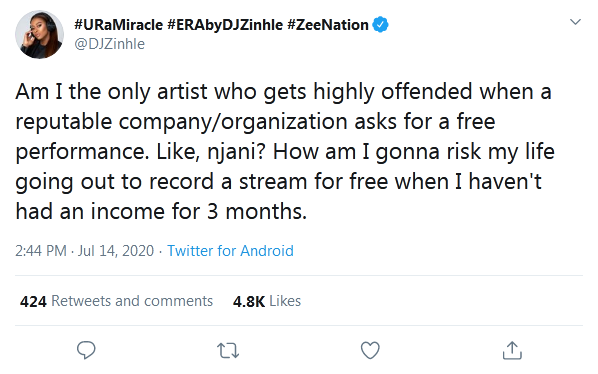 A fan asked her to name and shame the company, but DJ Zinhle was reluctant to do so. She dropped a laconic “no need” in response.

By the way, the statement she hasn’t had an income in three months left some fans curious and they made this known in a couple of tweets. DJ Zinhle has a face mask hustle and apparently sold out the first batch of the masks made for adults and kids. She made no income from those, too? Some fans are asking on Twitter.

Well, what do you think? You might wish to join the conversation by dropping your thoughts in the comment section.