It’s a season of dreams for many out there as Valentine’s Day pops on the calendar. So many have got wishes and dreams for that period. South African disc jockey and singer DJ Zinhle is one such person.

The “Umilo” singer, who recently gave birth to a daughter named Asante, tweeted that she would want her man to get her something from her brand Era by DJ Zinhle.

She didn’t tag Murdah Bongz to the posts, but it’s expected he would see it.

While some fans praised her wanting to have something from her brand because she’s indirectly promoting it, others thought her promotional ideas were skewed.

One fan described her marketing skills as top-notch.

Another fan dismissed DJ Zinhle as stingy, urging her to pay influencers to promote her brand. Unimpressed by the response, DJ Zinhle had indicated she would block that fan. You can check out the tweets. 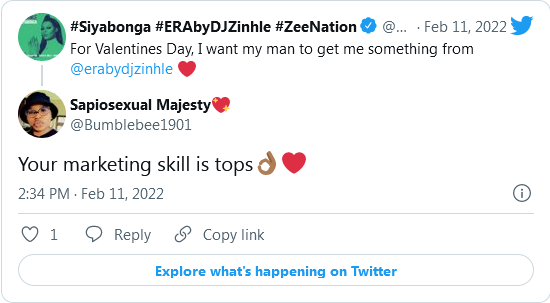 Always one to flaunt gifts she got from her man even before they became social media official, it’s expected DJ Zinhle would share her Era gift if she should receive one from her man. If that should happen, we’d bring all the details to you. So follow us and stay tuned.

Tags
DJ Zinhle
John Israel A Send an email 12 February 2022
Back to top button
Close
We use cookies on our website to give you the most relevant experience by remembering your preferences and repeat visits. By clicking “Accept All”, you consent to the use of ALL the cookies. However, you may visit "Cookie Settings" to provide a controlled consent.
Cookie SettingsAccept All
Manage Privacy