In what would strike many of her fans as a shocker, Doja Cat had announced that she was quitting music.

As you probably already know, music is no occupation people leave randomly. Most people sing until they die or until their voice dies – whichever comes first.

Doja Cat has not lost her voice, nor is she somewhere in the world of oblivion. On the contrary, she’s very much alive with her voice, but she said she’s quitting music after cancelling a show in Paraguay.

The prelude to her quitting was her sharing her frustrations on Twitter about her “disappointing” performance in Brazil.

Paraguayan fans who saw her tweet questioned her about not acknowledging her scheduled performance in their country and cancelling the same.

The American rapper was initially scheduled to perform at Music Festival Wizard’s Asuncionico 2022 in Asunción, Paraguay, on March 22.

Because the “Kiss Me More” rapper failed to acknowledge her Paraguayan fans and the cancellation of her concert in their country, the Paraguayans continued to drag her. Doja Cat clashed with them on Twitter.

The climax of it all was when she announced on the platform that she was quitting music, and she also changed her Twitter name to “I quit.” 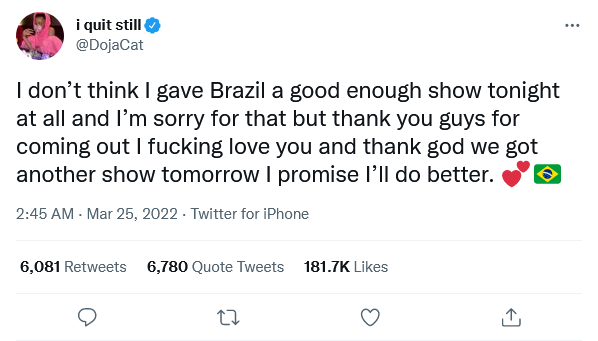 Is this the end of her musical odyssey? We serious doubt

Tags
Doja Cat USA
John Israel A Send an email 26 March 2022
Back to top button
Close
We use cookies on our website to give you the most relevant experience by remembering your preferences and repeat visits. By clicking “Accept All”, you consent to the use of ALL the cookies. However, you may visit "Cookie Settings" to provide a controlled consent.
Cookie SettingsAccept All
Manage Privacy