Being a celebrity has its blessings and its “curses” – as so many celebrities have realised as they walk the path of fame.

One such celeb is South African singer Donald. According to the “Her Name Is” crooner, an unknown woman stalks him whenever he’s in Nelspruit, and now he’s feeling spooked.

He made this revelation on Twitter, noting that the unnamed lady usually follows him to every gig in Nelspruit and would bring him presents at the VIP area each time and speak to him.

Because the contact has happened multiple times, he said he’s beginning to feel unsafe. The tweet attracted his fans and fellow musicians alike.

The musician Zamo encouraged him to get a restraining order against the woman, noting he had done the same previously. Some fans pointed out that Donald was just one among many celebs who are being stalked worldwide. You can check out the tweet below. 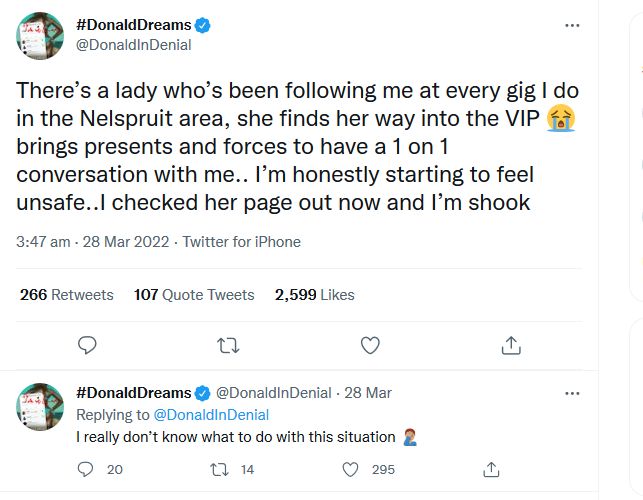 By the way, Donald recently released a project titled “I’m in love.” So could it be that the lady is in love, too? Someone had joked. He’s currently on tour to promote the project. Tour dates have been announced, with more to be added soon. Until then, be safe out there.

Tags
Donald
John Israel A Send an email 30 March 2022
Back to top button
Close
We use cookies on our website to give you the most relevant experience by remembering your preferences and repeat visits. By clicking “Accept All”, you consent to the use of ALL the cookies. However, you may visit "Cookie Settings" to provide a controlled consent.
Cookie SettingsAccept All
Manage Privacy