Lingas Entertainment boss Dr Malinga is uninterested in suing people. He would rather fight them away from social media, where they had trolled an insulted him.

This much became obvious when a local social media (@moe_suttle on Twitter), speaking about how Bonang had sued a local YouTuber who accused her of using cocaine, stated that Bonang should have stopped low like Dr Malinga would have down.

An unimpressed Dr Malinga had responded to the tweet, making it know that he doesn’t sure but would rather fight it out. He expressed his believer (@moe_suttle was familiar with kicks and asked him to send his location and quickly, too. 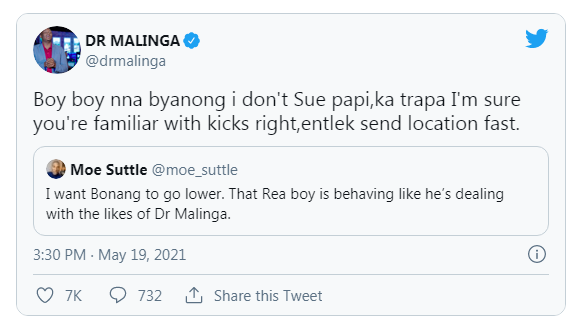 Dr Malinga’s response got social media users talking. While some thoughts his reaction humorous, others thought he stopped pretty low to ask for a fight instead of addressing the situation appropriately and with dignity.

By the way, Dr Malinga is ne musician with many interests. Besides music, he’s also an entrepreneur and the brains behind Lingas energy drink. Many of his fans call him an all-rounded entertainer.

What do you think of Moe Suttle’s opinion and Dr Malinga’s reaction? You may want to join the conversation by dropping your thoughts in the comment section below.