Clearly, the river of amity has drained between Jamaican dancehall star Mavado and his Canadian counterpart Drake. Mavado had appeared in Drake’s “Find Your Love” music video in 2010. But that was then.

Right now, diss is the language they both speak and understand. They have been having a back and forth. Drake is said to have provoked the new spat between them with “Only You Freestyle,” a collaborative tune with Headie One.

In the song, the Champagnepapi lobbed lyrical grenades at Cassava Piece, Mavado’s hometown in Kingston, Jamaica. In the freestyle, Drake apparently implied Mavado lacked art, power and refinement. You can check out the freestyle below.

Mavado wasn’t slow drawing his sword. Soon after Drake’s diss track, Mavado released a response diss of a track titled “Enemy Line.” He made the song available on YouTube as well as his Instagram channel, where he spat at Drake’s attempt to take over dancehall. As far as Mavado is concerned, Drake doesn’t belong in dancehall, which Mavado calls his playground.

Well, on Popcaan’s Instagram Live last Thursday, Drake, hitherto silent about “Enemy Line,” drew his sword as well and slashed Mavado. You may want to check out what he wrote in the screenshot below. 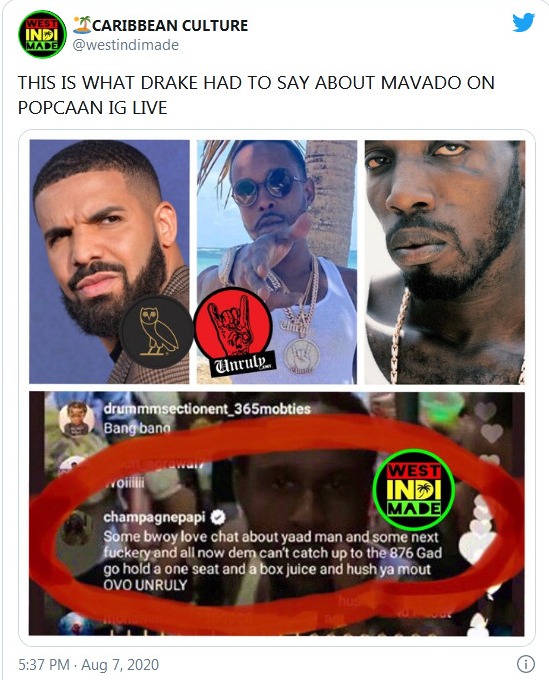 By the way, on his Instagram page, Drake has been promoting Mavado’s rival Popcaan.

Tags
Drake Mavado
John Israel A Send an email 10 August 2020
Back to top button
Close
We use cookies on our website to give you the most relevant experience by remembering your preferences and repeat visits. By clicking “Accept All”, you consent to the use of ALL the cookies. However, you may visit "Cookie Settings" to provide a controlled consent.
Cookie SettingsAccept All
Manage Privacy