It is not the first and second time that we have seen Drake support South African DJ uncle waffles, known for her high-energy performance.

In the past, Drake has been seen joining Uncle Waffles’ lifestream; he even sometimes drops some comments. However, this time he is showing support on a higher level by posting an image and an old performance video of an Uncle Waffles at a gig in Tanzania.

Champagne Papi posted the video on the Instagram story and captioned it with Uncle Waffles Instagram handle, followed by some emojis.

There have been many speculations as to whether Drake is crushing on Uncle Waffles or just showing love to a talented artist, but neither Drake nor Waffles have come out to clear the air on the relationship between them. 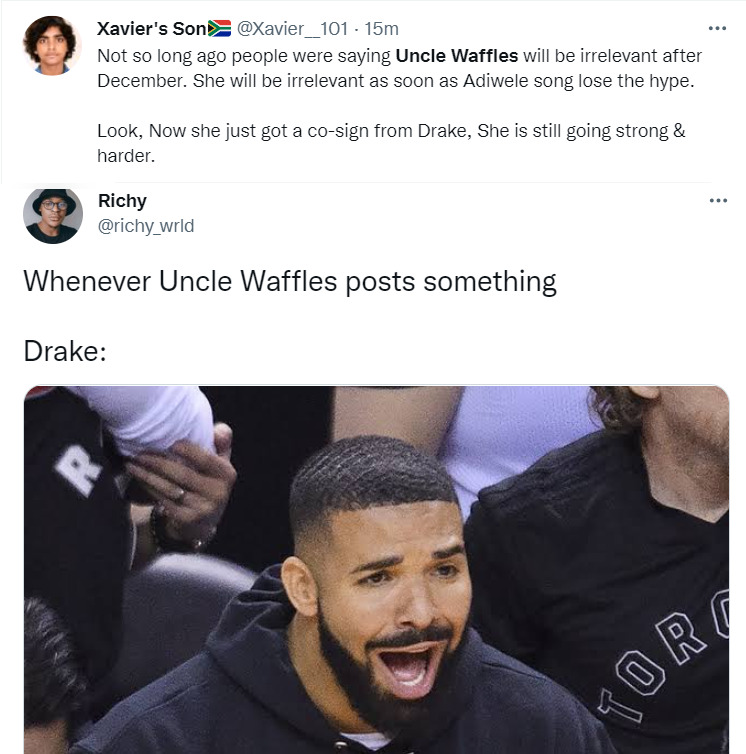 Uncle Waffles rose to fame during the recent coronavirus pandemic. While the country was on lockdown, the fast-rising DJ took it upon herself to learn how to DJ. She posted a few videos of herself dancing while DJing online. However, a particular video of her dancing to Young Stunna’s Adiwele went viral, and she has been a formidable force ever since. See the video posted by Drake below:

Uncle Waffles boyfriend after each and everytime Drake posts her on his Instagram pic.twitter.com/kHyhJbBQOd

Tags
Drake Uncle Waffles
James Lethabo18 April 2022
Back to top button
Close
We use cookies on our website to give you the most relevant experience by remembering your preferences and repeat visits. By clicking “Accept All”, you consent to the use of ALL the cookies. However, you may visit "Cookie Settings" to provide a controlled consent.
Cookie SettingsAccept All
Manage Privacy