At last, peace! After a needles Twitter tiff, South African rappers Duncan and Priddy Ugly had decided to embrace the Peace of Frothi.

Trouble started when Priddy Ugly declared in a tweet in Zulu that his song writing skills are unmatched. Duncan had seen the tweet and scoffed at the idea of Priddy Ugly, a much younger rapper, been the ace in musical pensmanship

Not one to be silenced, Duncan had fired another tweet, this time dragging Priddy Ugly’s daughter into the argument. He took down the tweet almost as soon as he made it. But it didn’t stop Priddy Ugly from cautioning him, in the following words: “Duncan umdala mfwethu.”

Those words indicated Priddy was still civil although Duncan had apparently insulted him. This caused Duncan to apologize. He said he felt sorry for his action and said they should let the conflict pass. 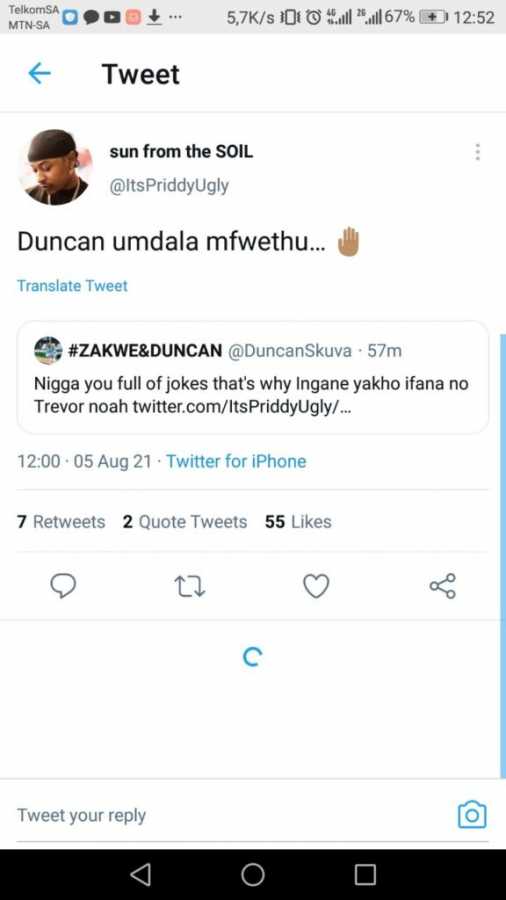 Priddy Ugly appeared to have accepted the apology, sharing a hand punch emoji and telling his fans that Duncan and Zakwe have an album out, and that hip hop is alive in South Africa.

Duncan & Zakwe have an album out,
Hip Hop is alive and well.

Tags
Duncan Priddy Ugly
John Israel A Send an email 6 August 2021
Back to top button
Close
We use cookies on our website to give you the most relevant experience by remembering your preferences and repeat visits. By clicking “Accept All”, you consent to the use of ALL the cookies. However, you may visit "Cookie Settings" to provide a controlled consent.
Cookie SettingsAccept All
Manage Privacy