American billionaire Elon Musk says the people who subscribe to Twitter Blue, the platform’s premium service, should be able to pay with dogecoin.

The world’s richest man, Elon Musk, became Twitter’s largest shareholder last week. There have since been talks of improvements coming to the platform, including an edit button and more. On Saturday, Musk suggested that it could be part of the social media platform’s forthcoming improvements.

We have no idea if it was just a suggestion or something already in the works, but Musk said, “Everyone who signs up for Twitter Blue (that means pays $3/month) should get an authentication checkmark.” In reply, a respondent asked for the subscription cost to be cheaper. He opined that $3 feeds an entire family in his country, Argentina.

The reply prompted a reaction from Musk, saying that the cost should be affordable and equivalent to one’s local currency. The tweet was followed by the suggestion, “Maybe even an option to pay in Doge?”. For a while now, the Billionaire has shared tweets teasing the cryptocurrency to his millions of followers on the platform. However, Dogecoin is currently worth $0.16 whereas Bitcoin is worth around $43,320. Twitter Blue will offer extra features to subscribers. That includes a  ‘preview’ button that lets users see and alter tweet for 30 seconds. 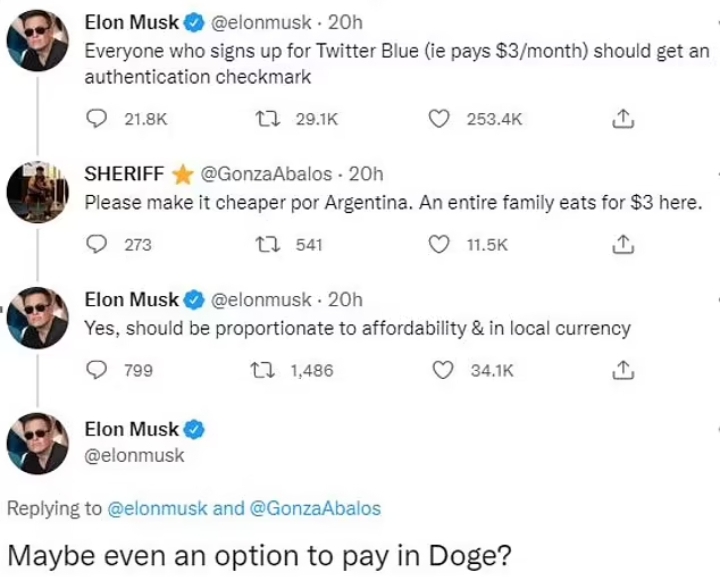 Tags
Elon Musk Twitter
John Jabulani Send an email 11 April 2022
Back to top button
Close
We use cookies on our website to give you the most relevant experience by remembering your preferences and repeat visits. By clicking “Accept All”, you consent to the use of ALL the cookies. However, you may visit "Cookie Settings" to provide a controlled consent.
Cookie SettingsAccept All
Manage Privacy