Welcome back to Twitter, my friend. Those were the words of Twitter owner Elon Musk as he lifted the ban on Kanye West’s account and opened the doors for him to continue using the platform. But it turned out the songster had no intentions of continuing using the platform, as he made another serious infraction, leading to the re-suspension of his account.

Kanye West had taken jabs at the Jews in the past. During a recent interview, he bawled that he loved Hitler, the German dictator who had gone down the books of infamy as the one who masterminded the Jewish Genocide in which over 6 million Jews perished.

West, famous for many songs, made another blunder after he shared an image of a swastika inside the Star of David. It was deemed an incitement and therefore against Twitter rules.

One Twitter user had tweeted that Elon Musk had to “fix” West. The Twitter CEO agreed, noting that he tried his best for Ye, but this time, having violated the rule against incitement, his account will be suspended. And that was what happened soon after. 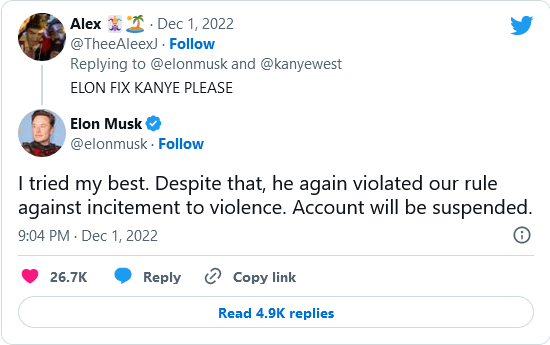 The Twitter account of the “Donda” rapper now has the tag “Account suspended.” It remains to be seen if he will one day find his way back to the platform.

Tags
Elon Musk Kanye West Twitter
John Israel A3 December 2022
Back to top button
7
Close
We use cookies on our website to give you the most relevant experience by remembering your preferences and repeat visits. By clicking “Accept All”, you consent to the use of ALL the cookies. However, you may visit "Cookie Settings" to provide a controlled consent.
Cookie SettingsAccept All
Manage Privacy