Not long ago rumors had hit town that Enhle Mbali may have reconciled with her estranged husband Black Coffee after it was noted that she called him “Dad” while thanking him for the car he bought for their son on his birthday.

In a post shared to her Instagram Story, she had insisted that she’s still “very single” and that some peeps were being paid to lie that she’s returned to her ex-husband. You can check out her post below. 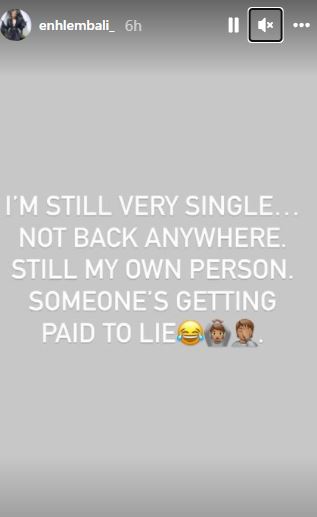 Enhle Mbali had a bitter divorce battle with Black Coffee which spilled right into social media, with the actress claiming that the songstress was just trying to frustrate her.

Alon the line, it appeared like a semblance of amity was restored when Enhle Mbali was found rocking a song by Black Coffee. At another point, she had called him “Dad” while sharing on Instagram that he’d bought their young son a racer for his birthday.

While Enhle Mbali claims to be as single as they come, some of her fans have not stopped wishing that she would one day make peace with Black Coffee. Time will tell.

Tags
Enhle Mbali
John Israel A Send an email 17 December 2021
Back to top button
Close
We use cookies on our website to give you the most relevant experience by remembering your preferences and repeat visits. By clicking “Accept All”, you consent to the use of ALL the cookies. However, you may visit "Cookie Settings" to provide a controlled consent.
Cookie SettingsAccept All
Manage Privacy