Eskom has revealed that stage 2 load shedding declared on Sunday the 17th of April has immediately been moved to Stage 4 in the early morning of Tuesday the failure of more generation units.

The energy utility revealed that extending to stage 4 from the previously announced Stage 2 occurred at 7:20 following the failure at Majuba Unit 5 and Tutuka Unit 4.

Regretfully, Eskom has just been forced to implement Stage 4 loadshedding at 07:20 following Majuba Unit 5 and Tutuka Unit 4 tripping. A full statement will be published in due course.

This time around, Eskom did not announce how long the load shedding would go on. More details will come when an official statement is released. CEO Andre de Ruyter is also scheduled to brief the media at 10:00 on the state of the grid.

The load shedding started just before the Easter holiday, but the energy utility promised that citizens would enjoy stable electricity throughout the long Easter weekend, a promise they could not keep by announcing a stage 2 load shedding on Sunday the 17th. 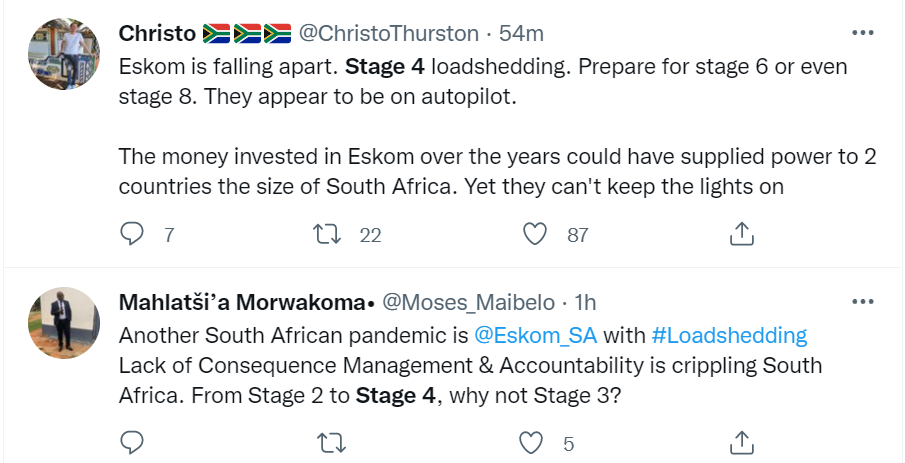 Tags
Eskom Load Shedding Stage 4
John Israel A Send an email 19 April 2022
Back to top button
Close
We use cookies on our website to give you the most relevant experience by remembering your preferences and repeat visits. By clicking “Accept All”, you consent to the use of ALL the cookies. However, you may visit "Cookie Settings" to provide a controlled consent.
Cookie SettingsAccept All
Manage Privacy