If you have designs on reality star and singer Faith Nketsi, you might want to jettison those right now, as she’s no longer on the market. After rumours surfaced online that she was getting married, it has emerged that she, indeed, got married. 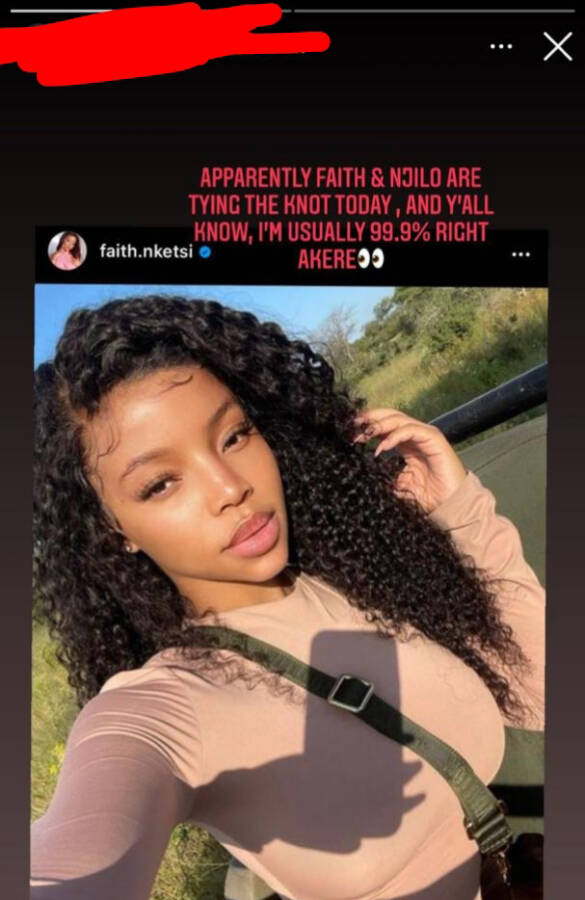 Her husband is.o other than the same man who had gifted her a Range Rover for her birthday, Nzuzo Njilo. Their traditional wedding, held over the weekend, was low-key, with only a few friends and family in attendance.

While Faith Nketsi has not shared any pictures of the traditional wedding on her main Instagram page, clips of the occasion are already flying all over the internet. Also, the reality star had affirmed she’s married by taking Nzuzo’s surname Njilo as part of hers. Now, she bears the name Faith Nketsi Njilo on Instagram.

The news of her wedding has been greeted with excitement by some of her fans and sadness by others – understandably those who had designs on her.

At any rate, as should be evident from the clips below, Faith Nketsi appears happy to be married.

By the way, before tying the knot with Njilo, a businessman, speculations were rife that she had moved on with another man. But then the traditional wedding clip overturns that rumour. Congratulations are in order for the new couple.

Tags
Faith Nketsi Nzuzo Njilo
John Israel A Send an email 11 April 2022
Back to top button
Close
We use cookies on our website to give you the most relevant experience by remembering your preferences and repeat visits. By clicking “Accept All”, you consent to the use of ALL the cookies. However, you may visit "Cookie Settings" to provide a controlled consent.
Cookie SettingsAccept All
Manage Privacy