In case you missed it, Faith Nketsi recently gave birth and announced the same on her Instagram page but without cluing fans in on the gender of the child. The delivery was a surprise to many because they never knew she was pregnant in the first place.

For those who might be wondering why she decided to keep her pregnancy under wraps, the controversial media personality has just addressed that. In a tweet, she indicated she was even aware when she got pregnant.

She only became aware later. And even when she did, she elected to keep the pregnancy a secret. That decision stems from her desire to keep her baby safe. By not shouting it out there that she’s pregnant, she kept her baby safe from [put what you think here].

She isn’t stopping there, though. According to her, if she wants to have another baby and eventually takes in, she would keep the pregnancy a secret as well until she gives birth. You can check out the tweet below. 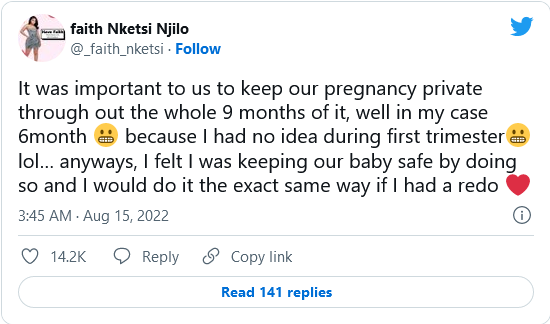 Faith Nketsi, who combines the roles of rapper and reality star, is married to Nzuzo Njilo. It’s her first pregnancy and her first child for him. Congratulations are in order.

Tags
Faith Nketsi
John Israel A Send an email 17 August 2022
Back to top button
Close
We use cookies on our website to give you the most relevant experience by remembering your preferences and repeat visits. By clicking “Accept All”, you consent to the use of ALL the cookies. However, you may visit "Cookie Settings" to provide a controlled consent.
Cookie SettingsAccept All
Manage Privacy