What’s better than one dope rapper? Two dope rappers of course. That’s exactly what we’re about to get from two of the dopest emcees on the SA Hip-hop scene. For a while now, Flvme and Die Mondez have been hinting on collaborating together. Finally, they’re bringing it to light. At least, we hope so.

Exactly one month ago, both rappers shared a video showing that they were in the studio together. They were reportedly working on a joint titled “Red Light District”. Also, earlier on in May, they teased a song titled “Married To The Money” with new monikers ‘Fleeto x Mizzo’.

It seems they’re now set to drop them off because they just shared more hints on Twitter. It’s got people wondering if both are just songs or if one of them is a project. Guess we’ll find out in a matter of days when they properly announce them. 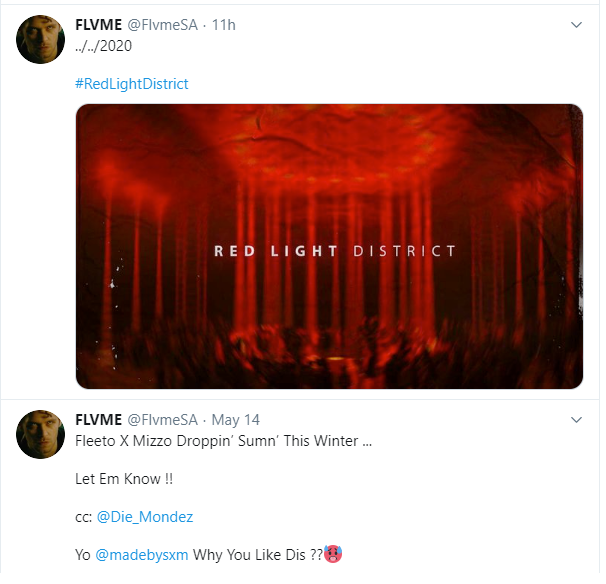 Tags
Die Mondez Flvme
John Jabulani Send an email 15 June 2020
Back to top button
Close
We use cookies on our website to give you the most relevant experience by remembering your preferences and repeat visits. By clicking “Accept All”, you consent to the use of ALL the cookies. However, you may visit "Cookie Settings" to provide a controlled consent.
Cookie SettingsAccept All
Manage Privacy