Apparently hip hop star Flvme has got a new project in the works. But he isn’t keen to release details about the project just yet. He wants to fulfill a little whim of his first…

In a recent post, the “Candy Man” of South African music announced that he has a new album (“Dead Or Alive,”) hashtaged #DOA, in the works, calling for 10k comments to share the tracklist and release date. The last time we checked, he is yet to reach his mark of 10k comments. 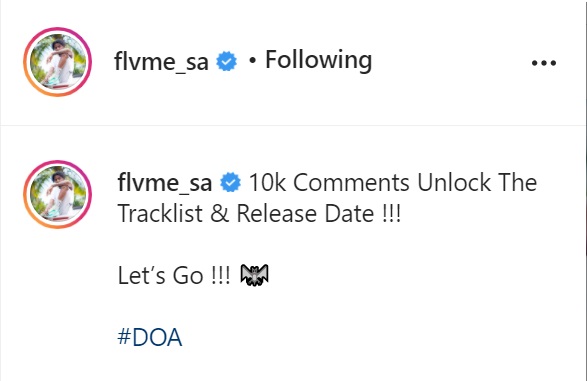 By the way, he isn’t the first artiste, South African or not, to give conditions for the release of project details. Artistes do it now and then. It’s a playful game which the fans appreciate.

Would Flvme get his 1ok comments? We are not clairvoyant and can’t say for sure. But rest assured that we are going to share the album with you on release. You might want to follow our social media channel, as well as subscribe to our newsfeed, for updates. Way to go!