Flvme has trolled fellow rapper Gigi Lamayne for having his ex on her POV Podcast. The trolling is especially interesting because Gigi Lamayne and Flvme had flirted heavily online in the past.

Flvme and Ashleigh Ogle were friends and lovers at some point. And then they had split, with Flvme accusing her of cheating on him with his friend. She denied the allegation and went on an accusations spree herself.

Their relationship has never remained the same. Now and then, the two fire shots at each other. Sometimes they’re direct in their missile hurling. At other times, they are indirect. Still, each is sensitive and appears to know when the other has fired a missile.

On this count, perhaps, it wasn’t surprising that Flvme should react when Gigi Lamayne decided to interview Ashleigh Ogle. During her interview with Gigi, Ashleigh had spilt open aspects of her life and relationship with the rapper.

For her part – and this must have been the part that triggered Flvme – Gigi Lamayne had claimed that she didn’t know Flvme until around the period he started dating Ashleigh. In a tweet, without mentioning Gigi Lamayne, Flvme had asked how bad her music was for her to create a whole show. 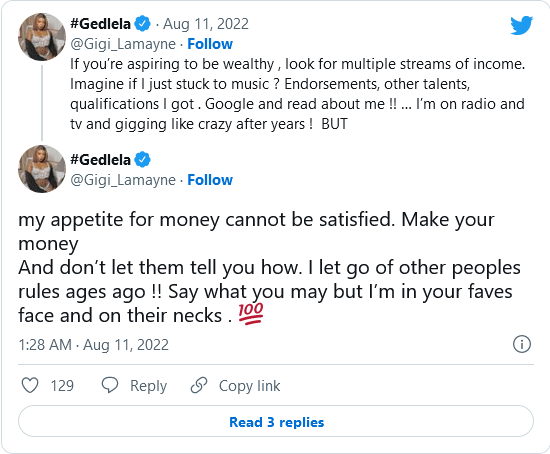 Tags
Flvme
John Israel A Send an email 12 August 2022
Back to top button
Close
We use cookies on our website to give you the most relevant experience by remembering your preferences and repeat visits. By clicking “Accept All”, you consent to the use of ALL the cookies. However, you may visit "Cookie Settings" to provide a controlled consent.
Cookie SettingsAccept All
Manage Privacy