Never known to keep quiet in the middle of sally, South African rapper Flvme has slammed a critic who accused him of copying the lyrics of his Canadian counterpart and OVO boss Drake.

A fan who goes by the Twitter handle @HarrisHxde said in a tweet that he discovered Flvme stole four lines from drake’s song “Trust Issues” and used them on his song “Rio.” He emphasized his point by writing out the stole lyrics.

The Twitteriat who came across @Harris Hxde’s post commended his vigilance. One fan even noted he’s heard the lines previous before Flvme used it but could not recall from what artiste. The tweet helped him

While not denying he actually stole the lines from the Canadian rapper, Flvme defended himself saying even drake does the same. You can check out the screenshot below. 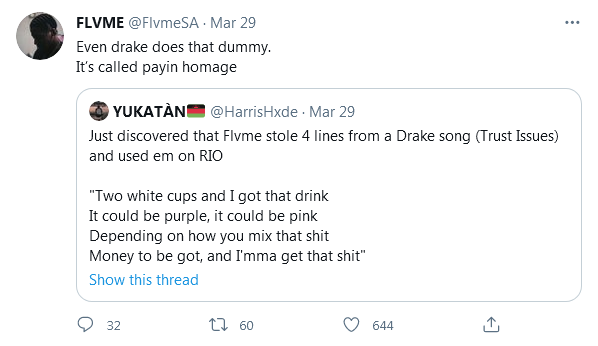 At any rate, line stealing or not, Flvme appears to be in a happy place right now in his relationship. The songster recently showed of his girlfriend, asking rhetorically why he should deny that she’s his.

Well, do you consider yourself a Flvme fan? Do you think the South African rapper has been copying Drake? You may want to join the conversation by dropping your thoughts in the comment below.