South African music producer Gemini Major has reacted to his fellow musician Cassper Nyovest’s claim that he produced the beat for the song “Touch the Sky.”

It all started after a fan asked who produced “Touch The Sky” (a song by Cassper Nyovest). As far as the fan is concerned, the person deserves a beer. Reacting to the post, Cassper had noted that the production was actually his.

A look through the screenshot showed that Cassper Nyovest’s name was there (Refiloe Phoolo) and so was Gemini Major’s name (Benn Kamoto). In all, based on the shared screenshot, five persons wrote the song. It was never the work of one person, as Cassper might have implied with his “that’s actually my beat” response. 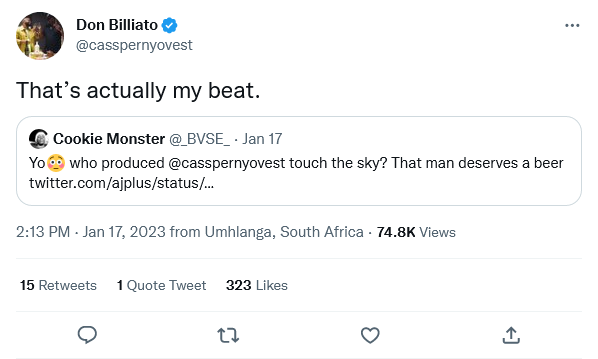 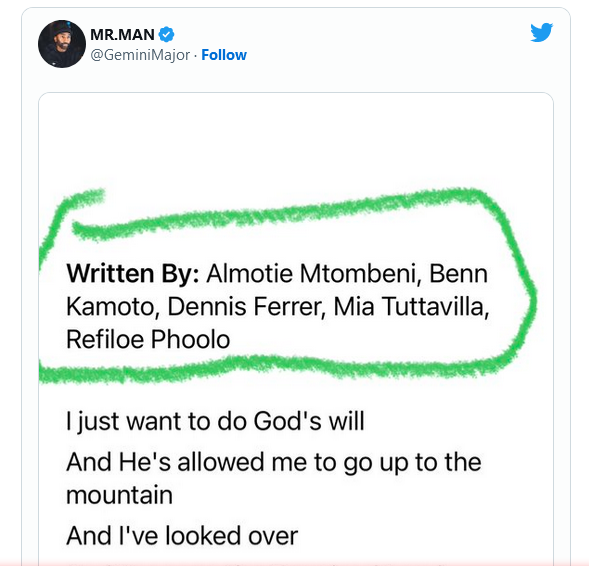 Since exiting Family Tree, Gemini Major’s relationship with Cassper Nyovest has been under close scrutiny. But as far as we know, there is no serious rift between them.

Well, now you know those behind “Touch the Sky.”

Tags
Cassper Nyovest Gemini Major
John Israel A24 January 2023
Back to top button
Close
We use cookies on our website to give you the most relevant experience by remembering your preferences and repeat visits. By clicking “Accept All”, you consent to the use of ALL the cookies. However, you may visit "Cookie Settings" to provide a controlled consent.
Cookie SettingsAccept All
Manage Privacy