Popular South African rapper, Gemini Major, has clapbacked at fans who criticized his verse on a recently-released single by AKA titled ‘Energy.’

The talented rapper has made it once to all that he is actually not a hip hop artist, but rather, a reggae artist. Gemini’s major genre is reggae and he is superb at what he does.

The popular rapper is tired of rap fans misconstruing his role in the South African hip hop. Gemini Major had explained a lot to hip hop lovers after they questioned his verse on AKA’s recently-released hit single ‘Energy.’

The ‘Right Now’ hitmaker explained that the reason most hip hop lovers do not understand his contribution is because his main genre is reggae and he is not a rapper. He also assured his fans that he is working on an album which will soon be released.

Before then, the talented star has to deal with his haters.

Energy is good. (However), Gemini Major ruins it for me. Ke laphihitse ke (I am tired of) this whole (lot) of hip hop artists singing like reggae artists. (It) just doesn’t sound genuine to me.

Who ever said (I) am a hip hop artist?

While several people are still working on accomplishing their 2020 goals, Gemini Major is already working on his goals for 2021.

Earlier last month, the talented star revealed that he would love to feature on no other than the award-winning Canadian rapper, Drake’s album. He is also bent on working with the talented American rapper, Meek Mill.

Gemini Major hasn’t only gotten his musical career right. His love life is also superb. According to reports, the popular rapper is dating his fellow musician, Rowlene Bosman. 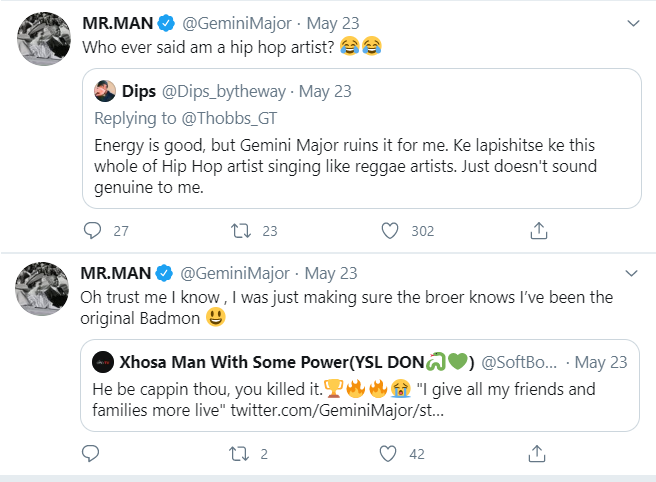