Celebrity pregnancies have been the subject of conversation for most Saffas of recent, with Gigi Lamayne being the latest to be reported pregnant.

In the past few weeks, several celebs have announced their pregnancies, as well as showed off their baby bumps. Think Brown Mbombo. Think Natasha Thahane.

On social media, the celebrated rapper had been silent for a while. But then, with the rumors flying around that she’s heavy with child, she had to pop online again to address the rumors.

She’s shared a sultry picture of herself standing close to her bed in her apartment. She had only a bikini on, which accentuated her figure, specifically her flat tummy.

The conversation changed almost immediately, with fans no longer talking about pregnancy but how stunning she looked. Yeah, her splendid figure became the focus.

There’s much more in store for the fans, though, as the songstress had also revealed that she’d be dropping a new album soon. Until the album drops. Fans may have to content themselves with the hot pic from her orbit. 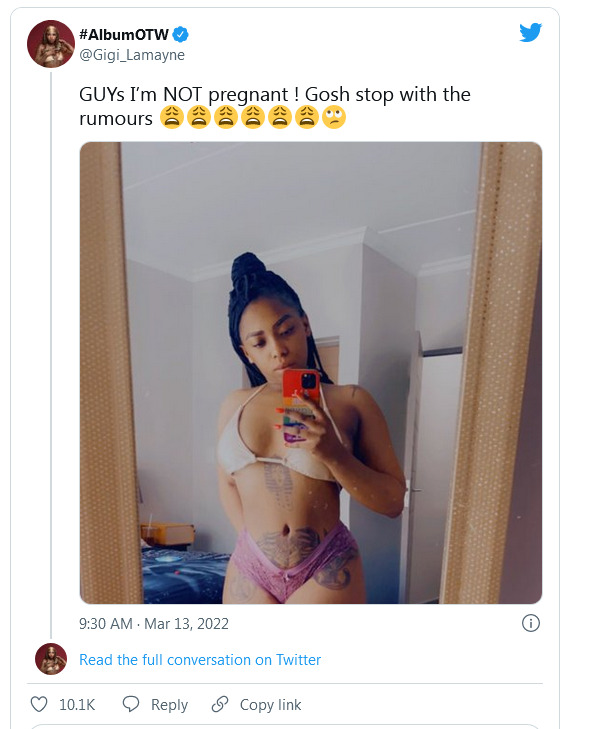 Well, we’ll be here to share the album with you as soon as it’s released. Just follow our social media channels and stay tuned.

Tags
Gigi Lamayne
John Israel A Send an email 14 March 2022
Back to top button
Close
We use cookies on our website to give you the most relevant experience by remembering your preferences and repeat visits. By clicking “Accept All”, you consent to the use of ALL the cookies. However, you may visit "Cookie Settings" to provide a controlled consent.
Cookie SettingsAccept All
Manage Privacy