The issue of police brutality seems to have taken the away, momentarily, from the public’s consciousness the ravages of the coronavirus pandemic. Out there people are angry, and South Africa’s hip-hop princess Gigi Lamayne is among the angry collective.

Not only is she angry; she is speaking out as well, calling on other celebrities to do the same. Clearly, she has not been impressed by the reaction from the industry yet. This much is apparent in her outburst on Twitter.

She denounced the industry as having “done me dirty,” but then she is adamant the members of the industry ought to take a stand in the killing of Collins Khosa, as much as their American counterparts had taken up the advocacy against the murder of George Floyd in the United States. 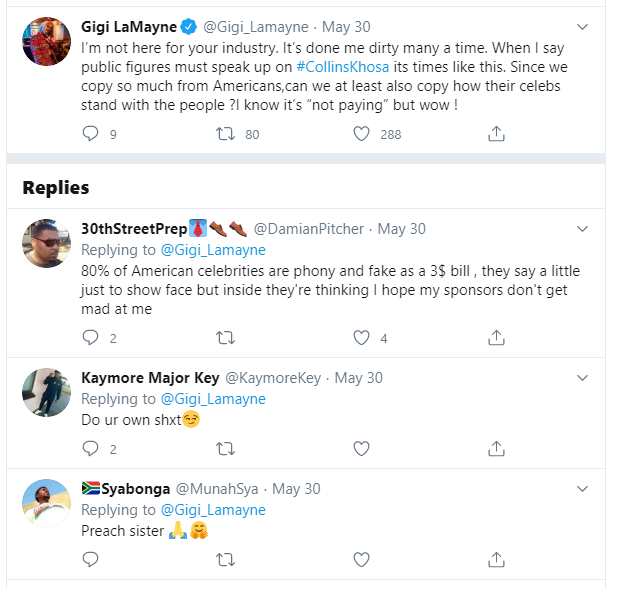 If South African celebs should take a stand against the killing of the America George, according to Gigi Lamayne, they should at least exhibit similar altruism and fight for justice for their compatriot Collins Khosa.

Collins Khosa died alleged from the injuries he sustained when soldiers assaulted him. But a recent inquiry has absolved the soldiers of any culpability in his death, as reported by News24.

By the way, the rapper JayHood is among those calling for Justice for Collins Khosa.