American comedian, and ‘Aladdin star, Gilbert Gottfried dies at the age of 67.

Comedian, Gilbert Gottfried, known for his work in the film “Aladdin”, and regarded as one of the most recognizable voices in Hollywood, has died after battling a long illness. His family announced on Tuesday, April 12. He passed at age 67.

In a statement to the Washington Post, his publicist said that he died of myotonic dystrophy type 2, a form of muscular dystrophy. His family announced his death in a tweet shared via his official page. They wrote;

“We are heartbroken to announce the passing of our beloved Gilbert Gottfried after a long illness. In addition to being the most iconic voice in comedy, Gilbert was a wonderful husband, brother, friend, and father to his two young children. Although today is a sad day for all of us, please keep laughing as loud as possible in Gilbert’s honor,” Gottfried was known for his humor, shrill voice, and incredible talent. 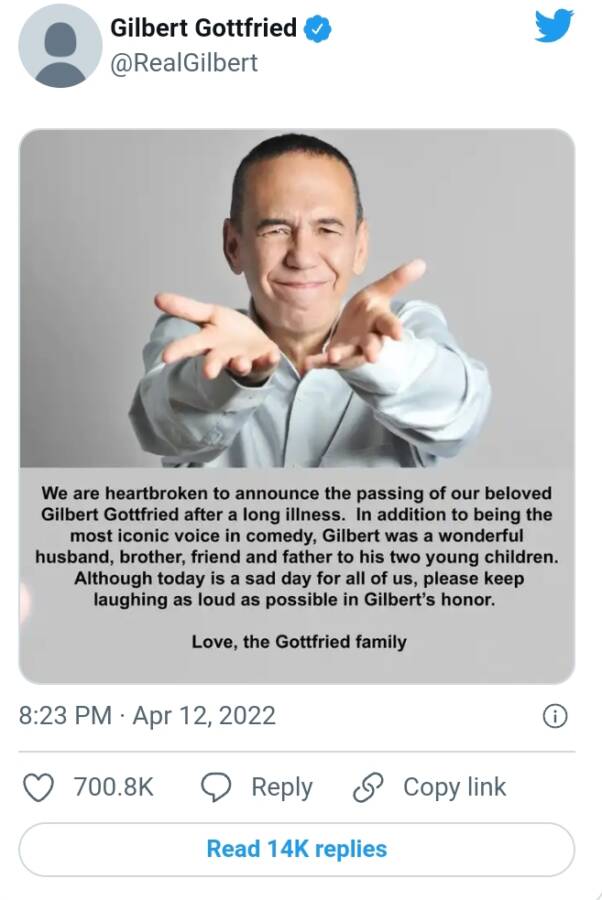 Tags
Gilbert Gottfried
John Jabulani Send an email 14 April 2022
Back to top button
Close
We use cookies on our website to give you the most relevant experience by remembering your preferences and repeat visits. By clicking “Accept All”, you consent to the use of ALL the cookies. However, you may visit "Cookie Settings" to provide a controlled consent.
Cookie SettingsAccept All
Manage Privacy