Celebrated singer Deborah Fraser died last Sunday, according to a statement released by her family. She was 56.

Before her death last week, she was said to have suffered a severe stroke and was taken to the hospital. She passed away at Christ Hani Baragwanath Hospital yesterday, May 15.

Her family announced her death in a statement published on her Instagram page. The family noted she died in the afternoon after a short illness, surrounded by her family and friends.

Although in the statement no clues were given on what actually ailed her, the family noted it would love to be given the space to process the tragedy. 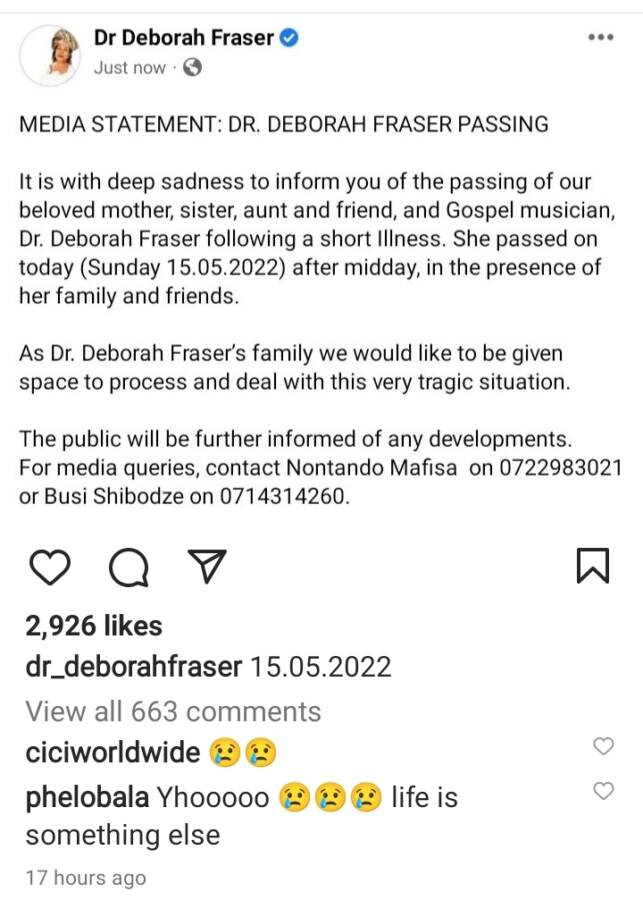 A gospel singer, Deborah Fraser was one of Mzansi’s notable voices and was well-loved for the soul she brought fo her performances.

The news of her death has, understandably, generated a wave of mourning among those who loved her and her music, celebs and ordinary folk alike. This much could be seen in the comments to the post about her passing.

Tags
Deborah Fraser
John Israel A Send an email 16 May 2022
Back to top button
Close
We use cookies on our website to give you the most relevant experience by remembering your preferences and repeat visits. By clicking “Accept All”, you consent to the use of ALL the cookies. However, you may visit "Cookie Settings" to provide a controlled consent.
Cookie SettingsAccept All
Manage Privacy