AKA’s “Bhovamania”EP isn’t here yet. But expectations are pretty high for that body of work which drops on 6 November 2020.

Already AKA has fans hyped. His pal Don Design recently tweeted that he watched AKA create six hits in four hours. AKA shared the tweet on his Instagram page without comment, showing indeed he created what was ascribed to him by his pal.

Don Design recently released “Python,” a collaborative single with AKA and Moozlie. The video of the single is out as well.

In his tweet, Don Design emphasized the word hit. 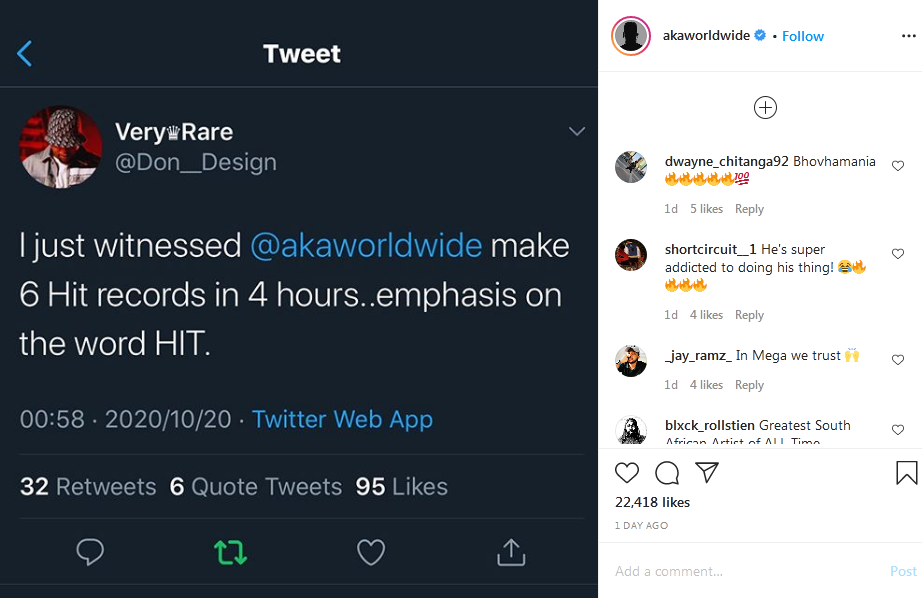 The tweet itself elicited mixed reactions from fans. While some think, een without having listened to them songs, that indeed the “Fela In Versace” rapper made six hits in four hours, others were unimpressed, wanting to listen to the songs first.

It is unknown if the six hits Don Design spoke of are part of the imminent “Bhovamania” EP or are works that will find a home in a new project.

At any rate, whatever AKA drops in the coming weeks we’re going to share with you here at UbeToo. You might want to stay in the loop by subscribing to our newsfeed as well as following our social media channels.