Has AKA of the “Energy” fame been signed to controversial record label Ambitiouz Entertainment? The rumour swirling across Mzansi right now is that he has.

This isn’t just another rumour but one that’s already trending on Mzansi Twitter. Some fans are already concerned for the rapper whose birth name is Kiernan Jarryd Forbes.

The consensus among his concerned fans is that he should read his contract carefully to avoid stories that touch. Apparently this piece of advice was informed by the experiences of artistes, formerly signed to the record label, who had fled one point or the other. Think Fifi Cooper. Think Amanda Black. Think Emtee. Think…

However, AKA has come out to disabuse the mind of the public from the news of any contract with Ambitiouz Entertainment. According to AKA, the news of him joining Ambitiouz is totally strange. He said he was confused, and wondered why the news was trending. 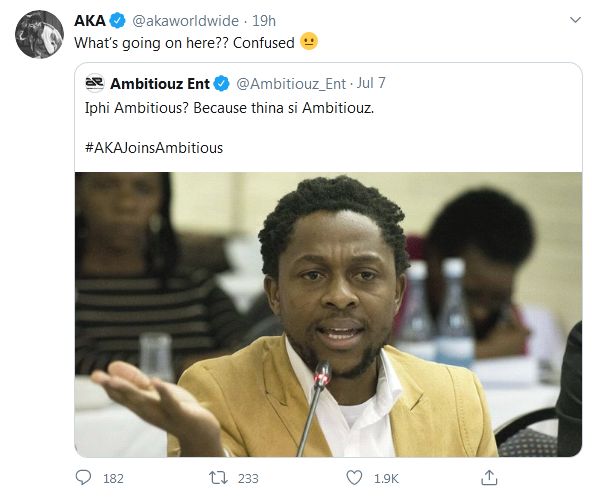 Ambitiouz Entertainment has equally dismissed the news of signing the rapper who recently spoke of his plans to run for the Presidency in South Africa.

Well, what do you think? Have you any idea how the rumour started trending? You may want to join the conversation by dropping your thoughts in the comment section below.