It Started As A Rumour (Read here)

We must confess, no one saw this coming. Mzansi has been rocked with news of the death of one of SA Hip Hop’s biggest and most influential voices. Rumours flew after Riky Rick shared a cryptic tweet around 3 AM this morning hinting on taking his own life. 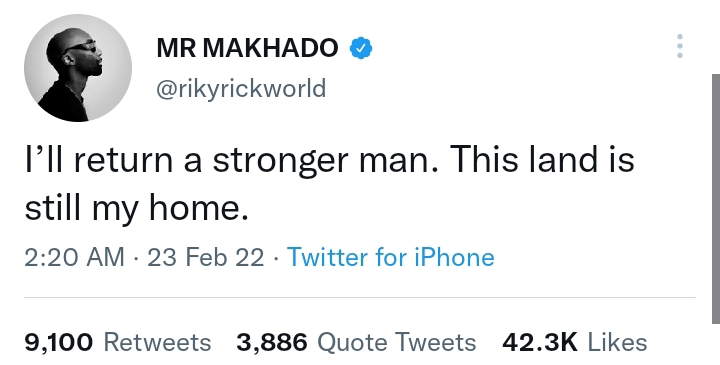 Riky Rick’s Cause Of Death

At first, fans thought it to be a joke and took to social media to react. Recent reports reveal that the “Mali Eningi” star’s family has finally confirmed his passing. According to an article by Sunday World, Riky Rick was found struggling for his life after hanging himself in his home in Johannesburg.

How & When Riky Rick Died

According to information from people close to the musician, born Rikhado Muziwendlovu Makhado, passed away in the early hours of the morning. He died while being rushed to the hospital. Sheikani Makhado, a spokesperson for the family confirmed the news this morning saying “The family is still meeting, and we will release a statement in due course. We ask for your understanding.”

Riky Rick was previously criticized on social media for posting a video of himself and his wife dancing to his new number 1 song “Sondela”. The Mzansi rapper also announced a partnership with African Bank. He was aged 34 years old, and is survived by his wife, Bianca, son Maik Daniel Makhado and a 10-year-old daughter named Jordan.

Riky, who has publicly talked about his battle with drugs and mental sickness, disclosed to Drum magazine back in 2020 that he had begun going for therapy many years earlier.

Tags
Riky Rick
John Jabulani Send an email 23 February 2022
Back to top button
Close
We use cookies on our website to give you the most relevant experience by remembering your preferences and repeat visits. By clicking “Accept All”, you consent to the use of ALL the cookies. However, you may visit "Cookie Settings" to provide a controlled consent.
Cookie SettingsAccept All
Manage Privacy