A blood clot on the brain is no joke. In fact, only a few happen to survive it. One such survivor is Hailey Bieber, the lover of Canadian singer Justin Bieber.

The influencer had a beat of a health scare last whenwee. she reportedly suffered stoke-like symptoms. She was hospitalized.

Recalling the incident, she had noted that it was one of the scariest experiences she’s ever had. She said she’s home now and doing well. She’s grateful to the doctors who had taken care of her through it all.

She also expressed gratitude to everyone who had reached out to her in support and love. 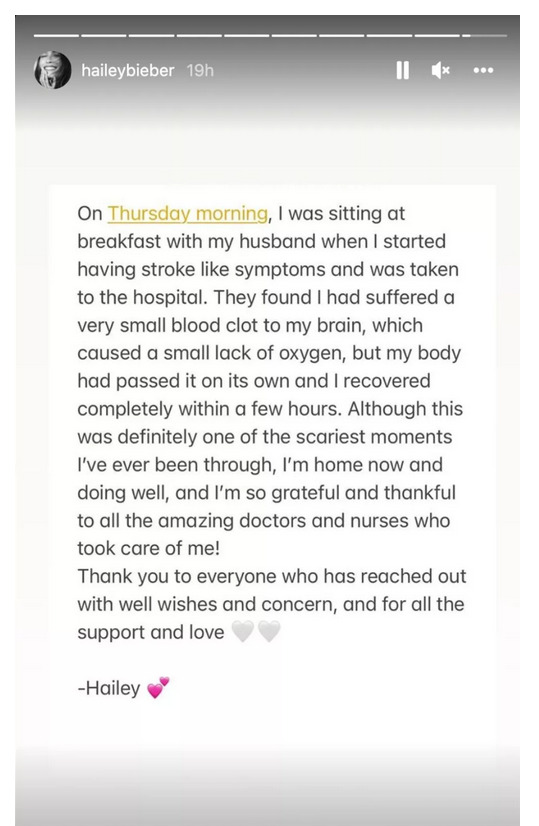 By the way, just recently, words had started flying that Hailey and Justin might be going through a rough patch in their relationship because he earnestly desires a child whereas she thinks she’s very young yet and wants to focus on her career.

The health scare appeared to have pivoted the narrative from when they would both agree to have a child to Hailey recovering fully from the clot. It will be interesting to see what will follow her fun recovery.

Hailey and Justin have been married twice – the first in 2018 and the second a year later.

Tags
Hailey Bieber
John Israel A Send an email 15 March 2022
Back to top button
Close
We use cookies on our website to give you the most relevant experience by remembering your preferences and repeat visits. By clicking “Accept All”, you consent to the use of ALL the cookies. However, you may visit "Cookie Settings" to provide a controlled consent.
Cookie SettingsAccept All
Manage Privacy