Popular South African music producer, Heavy K, has taken to his social media page to lament about the challenges he is currently facing with his record label.

We are wondering if the current label he was referring to is his Drumboss record label or parent label, Universal Music Group. The talented producer did not reveal the name of the label and this has made us curious.

Heavy K has stated that he has big issues with the label and he warned them that if they frustrate him again, he would reveal their secrets to the public.

Heavy K took to his Twitter page to write:

I’ve been quiet for too long because I don’t believe in allowing other people to fight my battles! Bathi in xhosa “indoda iyazidodela” but I’ve taken so much shit from this label & it’s time now! I won’t mention names for now but if they push me I’ll put everything here so… 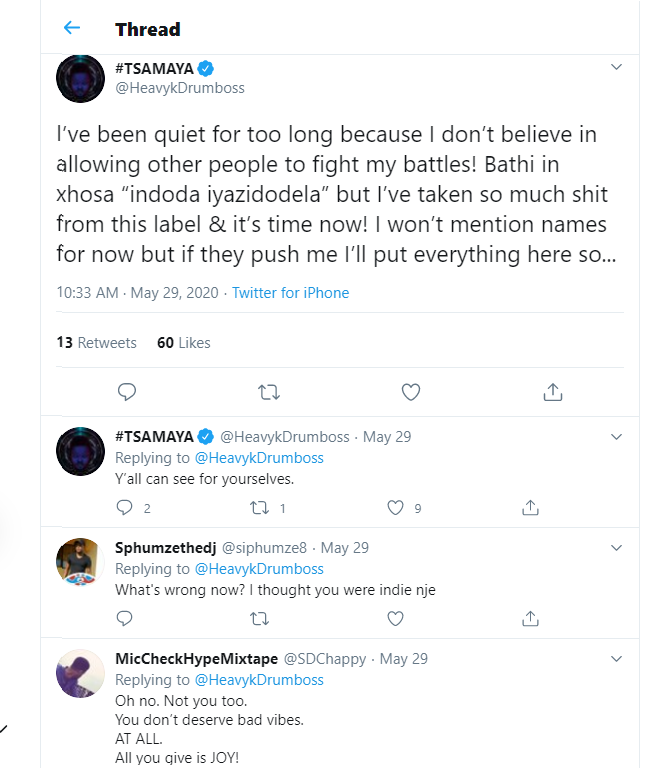 In other news, Heavy K’s Respect The Drumboss album and some other projects have gone gold and platinum. The talented hitmaker has accomplished a new feat as several songs from his highly-acclaimed 2018 album titled ‘Respect The Drumboss’ have gone gold and platinum. The talented producer thanked his fans for their support as he revealed that he hasn’t released any album that did not achieve the gold status.

Tags
Heavy K
Annika Melisizwe Send an email 30 May 2020
Back to top button
Close
We use cookies on our website to give you the most relevant experience by remembering your preferences and repeat visits. By clicking “Accept All”, you consent to the use of ALL the cookies. However, you may visit "Cookie Settings" to provide a controlled consent.
Cookie SettingsAccept All
Manage Privacy