“Wena” hitmaker Heavy K has thrown a shade at his ex-girlfriend Nicole Maleka after she spoke about their relationship and how it ended.

While on her YouTube show Sip or Spill with Lelo & Nicole, she had claimed that her relationship with the DJ and producer ended because he was controlling, outgoing and just not good for her.

She, however, clarified that they actually didn’t clash. She made that revelation in response to a fan who had asked why her relationship with the muso ended.

Heavy K, a notable house music producer who recently veered into amapiano, saw the show and decided to respond.

In a tweet, he said he’s a guy who minds his own business not matter because he doesn’t want to clash with anyone. And now he’s being hit by bullets for that. You can check out the tweet below. 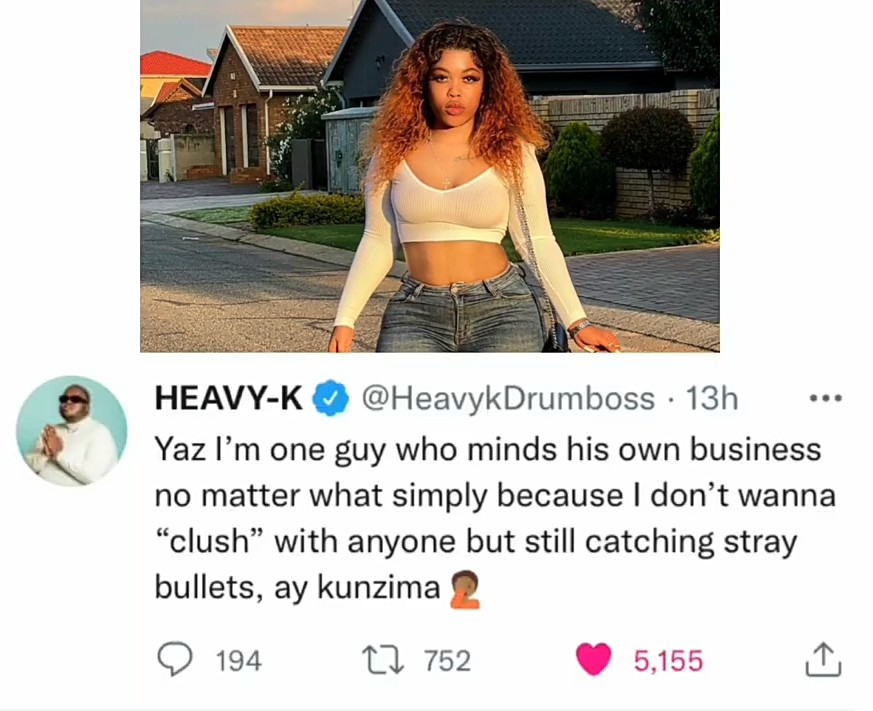 In saying he didn’t want to clash, Heavy K confirmed what Nicole had said on the set of her show. They didn’t clash but went their separate ways. Heavy K has moved on, and so has Nicole.

By the way, not long ago, Heavy K’s other ex, Ntombi, had accused him of abandoning their child, who has cerebral palsy — a claim he denied.

Tags
Heavy K Nicole Maleka
John Israel A12 April 2022
Back to top button
Close
We use cookies on our website to give you the most relevant experience by remembering your preferences and repeat visits. By clicking “Accept All”, you consent to the use of ALL the cookies. However, you may visit "Cookie Settings" to provide a controlled consent.
Cookie SettingsAccept All
Manage Privacy