The funeral details for the late Ferguson Films boss Shona Ferguson has been released by the family .

In a statement released yesterday via the Twitter handle of the deceased, @Ferguson_Films, the family had informed the public that his funeral would hold tomorrow 4 August 2021 in a private ceremony attended only by family members.

The family thanked friends as well as members of the public for their kind words during their grieving moments. For those seeking more information, the family shared the phone number of a spokesperson (Thato Matuka).

There are no details yet about a memorial service. According to the family, details about that will be communicated in due course once the necessary arrangement have been made. 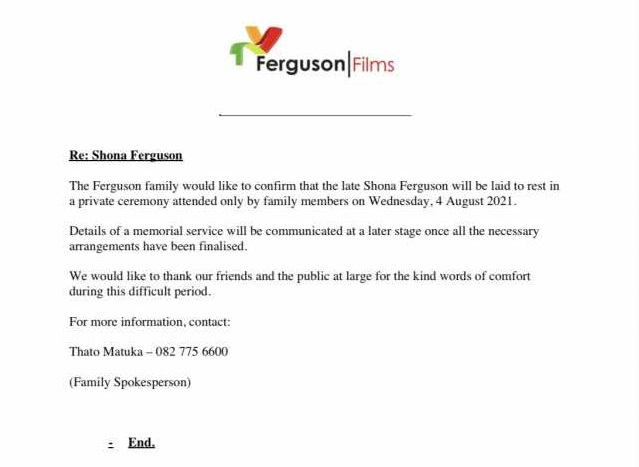 Aaron “Shona” Ferguson died days ago from coronavirus complications, according to his family, throwing the movie industry into a state of mourning. He had founded Ferguson Films with his wife Connie. At the time of his death he had already announced plans to establish a film school in South Africa.

He would be greatly missed for his contribution to South Africa’s film and entertainment industry. You may want to follow our social media channels in order not to miss details of his upcoming memorial service.

Tags
Shona Ferguson
John Israel A Send an email 3 August 2021
Back to top button
Close
We use cookies on our website to give you the most relevant experience by remembering your preferences and repeat visits. By clicking “Accept All”, you consent to the use of ALL the cookies. However, you may visit "Cookie Settings" to provide a controlled consent.
Cookie SettingsAccept All
Manage Privacy