She had shared the video yesterday 23 July 2020. Within hours the video vanished from her YouTube channel. Some fans had thought back then that the songstress made the video private to make for some modifications.

Anyway, that thinking was soon buried when the songstress herself raised alarm about the disappearance of the video, claiming a hacker had taken it down. She re-uploaded the video to her account while asking fans to watch the video again and get her view count back up. 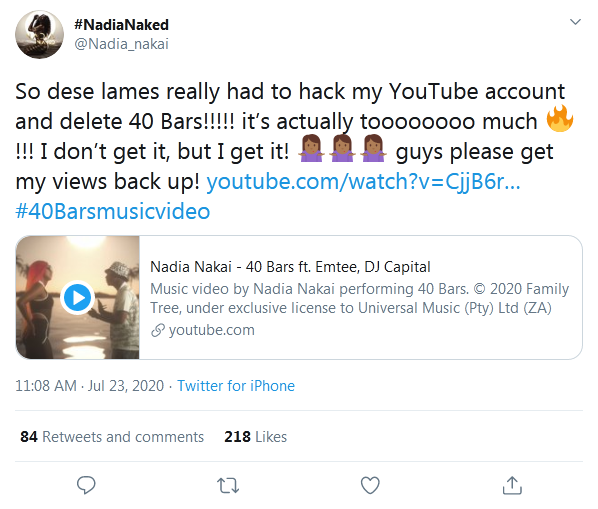 Emtee, who had featured on the video, shared Nadia Nakai’s tweet, while reliving the memory of the hacking of his Instagram account. It is said he insinuated Ambitiouz Entertainment, the record label to which he was previously signed, was privy to the hacking.

By the way, if you missed the video when it was released and alleged deleted by a hacker, you can watch it here.

Tags
Nadia Nakai
John Israel A Send an email 24 July 2020
Back to top button
Close
We use cookies on our website to give you the most relevant experience by remembering your preferences and repeat visits. By clicking “Accept All”, you consent to the use of ALL the cookies. However, you may visit "Cookie Settings" to provide a controlled consent.
Cookie SettingsAccept All
Manage Privacy